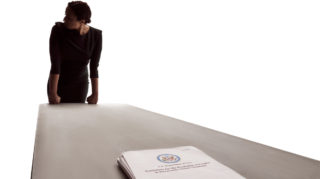 Sarah MacIntyre, a presidential appointee parachuted into the Foreign Service, has been assigned two wary young diplomats to develop her pet project: New Training Scenarios for the Resolution of Intractable Global Situations. The three begin to role-play, led by a charismatic woman experienced in persuading men to lay down arms.

Suddenly, a rebel group lashes out in a distant country, destroying the tenuous peace recently negotiated by McIntyre. The women’s role-playing becomes increasingly charged, pushing them deeper into the bodies and minds of violent insurgents. Meanwhile, as Washington undergoes its own regime change, their work becomes active weaponry for Sarah’s political enemies.

Intelligence is a play developed by playwright Helen Banner and director Jess Chayes that pulls the audience into a Washington, D.C. basement conference room, for an intense experience of how we code and decode others and ourselves through our imaginations. Intelligence received developmental support as part of the 2017 Artist Residency Program of The Drama League of New York, and the New Georges JAM.

Helen Banner is a playwright and librettist and co-founder of the Byzantine Choral Project. She grew up in the British Channel Islands and studied at Cambridge and the Tisch School of the Arts, NYU, where she completed her MFA in Dramatic Writing and was awarded the John Golden Playwriting Award. She is also an alumna of The Jam and an associate artist at New Georges. Her work has been developed at the O’Neill Theater Center, the Drama League, Fresh Ground Pepper, Wild Project, Dixon Place, the Tank, Edinburgh Fringe Festival, The Lark, Great Plains Theatre Conference and the Last Frontier Theatre Conference and she was a participant in the Ingram New Works Lab 2015-16 at Nashville Repertory Theater. Helen was recently a 2016-17 Special Resident at New Georges creating La Déroute, a medieval water opera in collaboration with composer Catherine Brookman for their Works on Water take-over of 3LD in 2017. Her choral play Icons/Idols: Irene, written in collaboration with the composer Grace Oberhofer for the Byzantine Choral Project, was the opening show at the New Ohio’s Ice Factory 2016 and they were awarded a 2017-2018 OPERA America Discovery Grant to continue developing Icons/Idols as a tetralogy of choral plays. The Byzantine Choral Project are currently 2018-2020 Archive Residents at the New Ohio/IRT Theaters. www.helenbanner.com

Jess Chayes is an award-winning director and the BOLD Associate Artistic Director at Northern Stage as well as a founding co-artistic director of The Assembly, with whom she has co-created and directed ten original productions, including Seagullmachine (La MaMa), I Will Look Forward To This Later (New Ohio Theater/IRT Theater Archive Residency) and HOME/SICK (NY Times and Backstage Critics’ Pick). Recent directing includes The Flick (Warehouse Theatre), Holidays In/Coyote (The Tank), Lipstick Lobotomy (The Juilliard School), The Providence of Neighboring Bodies (Dutch Kills), Half Moon Bay (Lesser America) and Primal Play (New Georges). She has developed new work with The Vineyard, The Playwrights Center, Ars Nova and New York Theatre Workshop, among others. Jess is a NYTW Usual Suspect, a 2018 Audrey Resident with New Georges, a co-founder of New Georges Jam artists’ lab and alum of The Civilians R&D Group and Soho Rep Writer/Director Lab. She was Associate Director on Peter and the Starcatcher (Brooks Atkinson Theater and New World Stages) and Misery (Broadhurst Theater). Jess is the recipient of the 2017 Lucille Lortel Award from the League of Professional Theatre Women. www.jesschayes.com

Lucy Jackson is an independent performing arts producer. She is Producing Director for collaborative theatre company The Assembly; productions include Seagullmachine (Ellen Stewart Theatre, La MaMa ETC), HOME/SICK (Odyssey Theatre, LA & JACK, Brooklyn) and I Will Look Forward to this Later (New Ohio, NY). Other productions include Heather Christian’s Animal Wisdom (Bushwick Starr), Cuddles by Joseph Wilde (Ovalhouse, London & 59E59, NY) and Mudlarks by Vickie Donoghue (HighTide, Theatre503 & Bush Theatre, London), as well as productions at the Edinburgh Fringe, VAULT and Latitude festivals in the UK. Line producing includes Oh My Sweet Land (The Play Company). Tour producing includes Our Carnal Hearts for Rachel Mars, Okwui Okpokwasili’s Poor People’s TV Room for PerformancePractice.org, and RoosevElvis for the TEAM. She is a 2018-2020 WP Lab Fellow, has been a 2016-17 Fellow of the Emerging Leaders of New York Arts, a Stage One Apprentice for Mark Rubinstein Ltd., Development Director for the New Ohio Theatre and General Manager/Associate Producer for the TEAM. www.lsajackson.com

Since 2011, Dutch Kills has been committed to developing and producing new plays by the most exciting emerging theater artists in New York and beyond.  Dutch Kills full productions include THE SISTER by Eric John Meyer at the 4th Street Theater and later at Paradise in Edinburgh, IN QUIETNESS by Anna Moench at Walkerspace, LATTER DAYS by Ben Beckley and THE PROVIDENCE OF NEIGHBORING BODIES by Jean Ann Douglass, which then had its UK premiere with Underbelly in Edinburgh, and SELKIE by Krista Knight at the Wild Project.   Upcoming productions include SOLITARY, our first full-length physical theater production, to have its world premiere in Edinburgh this summer. In addition, the company has produced dozens of developmental workshops and readings including works by Kate Benson, and Alexandra Silber. www.dutchkillstheater.com