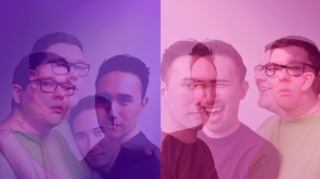 Contemporary farce meets queer fantasia in DINNER WITH GEORGETTE, a world premiere about two gay college lovers and their tangled experiences in the closet.

Balti and Jaker begin the play as two gay 20 year-olds enjoying the romantic and sexual possibilities on their contemporary college campus. But when Jaker asks Balti to pretend to be straight for the duration of Jaker’s grandmother’s visit to campus, a spiraling journey begins in the friends’ consciousness. Balti finds himself traveling back in time, stumbling upon the mystifying voices of a Cherub, a rattlesnake, a war child, and other peculiar characters along the way.

Rick Burkhardt is an Obie-award-winning playwright, composer, director and performer whose original music theater pieces have been performed in over 40 US cities, as well as in Australia, Europe, Taiwan, Canada and Mexico. He studied Music Composition (PhD 2006) at the University of California, San Diego and playwriting (MFA 2016) at Brown University with Erik Ehn. His plays, including Three Pianos, Conversation Storm, Storm Still and The Climb Up Mount Chimborazo, have been produced by organizations such as New York Theatre Workshop, the American Repertory Theater, P. S. 122, LaMama NYC and River-to-River NYC, as well as numerous US and international festivals, and published by New York Theater Experience. As a songwriter he has shared stages with artists such as Pete Seeger, the Indigo Girls, Holly Near and Utah Phillips, and his original songs have been featured on radio programs like NPR’s “Morning Edition” and Pacifica’s “Democracy Now.” As playwright and composer, he has collaborated with theater-makers including Lisa D’Amour, Anne Washburn, Erin Courtney, Kristin Kosmas, Dave Malloy, Sylvan Oswald and Rachel Chavkin. In addition to workshops across the US and in Europe, he has taught full courses in playwriting at Brown University, in music composition at Harvard University and in experimental music theater at The Evergreen State College.

Ellie Heyman is a New York based director and the Director in Residence at Joe’s Pub at The Public Theater. Recent credits include: Jason Craig & Dave Malloy’s Beardo (Drama Desk Award Nomination; Pipeline Theater), Erin Markey’s Boner Killer (Under the Radar/The Public Theater), Becca Blackwell ‘s They, Themself and Schmerm (Under the Radar/The Public Theater); Adrienne Truscott’s THIS (Bessie Award Nomination for Outstanding Production; NYLA) and The Traveling Imaginary, an internationally touring theatrical rock show with Julian Koster (Neutral Milk Hotel) rated “Top 5 shows of the year” by NPR. Many of these shows are touring throughout 2017-2019. International credits include: Elevation 506 in Bulgaria with Yasen Vasilev and Home/Yuva in Istanbul with Sami Berat Marcali. Her narrative podcast, The Orbiting Human Circus (Of the Air) (Night Vale Presents) was rated #1 on Apple Podcasts and downloaded over 4 million times. Upcoming projects include Dane Terry’s Boomtown (PS122/COIL), Fusiform Gyrus (Talking Band) and new fiction podcasts with Night Vale Presents. She is a graduate of Northwestern University and Boston University, a Drama League Alumni and a Time Warner Directing Fellow at the WP Theater. ellieheyman.com.

Katja Andreiev designs costumes for theatre, opera, dance, performance art, and film, primarily in New York City where she has lived since attending NYU Tisch School of the Arts. After working for the Theater Development Fund Costume Collection for their final years in their Manhattan space, she now designs freelance and writes articles for theatrical publications including Stage Directions Magazine, and Theater Bay Area. Her primary areas of continuing study include Shakespeare and Chekhov, but she is also dedicated to contemporary performance, particularly new works that expand the boundaries of genre, and theatrical space. She has designed for art galleries and site specific performance art as well as for short films, music videos, and the occasional circus act.

James Fluhr is an actor, designer and writer of fabulous theatre. Addicted to coffee and glitter.

Jenn Haltman is a freelance theatre, film, and new media casting director. Recent theatre projects include Babette’s Feast, Red Herring, The Niceties, and Sex and Other Disturbances (all Portland Stage), A Christmas Carol (Hartford Stage), Music Man, Far Away (Sharon Playhouse), and The Wedge Horse (Fault Line). Films include Then There Was (dir. Louis Mandylor), Boy Meets Girl” (dir. Eric Schaeffer), the award-winning short Behind the Wall (dir. Bat-Sheva Guez), and the 2017 Sundance selection Madeline’s Madeline (Josephine Decker). As Co-Producing Artistic Director of Between Two Boroughs Productions, Jenn has cast and directed Summertime and The Understudy and is in pre production for Cannibal Galaxy: a love story (June 2018). Other directing credits include the recurring Cast and Loose Live! at Joe’s Pub and Maybe Never Fell for Axial Theatre Company. Previously, Jenn was the Casting Associate at New York Theatre Workshop (shows include Peter and the Starcatcher, Little Foxes, Aftermath, The Seven) and worked with Page 73 Productions, Pig Iron Theatre Company, and Soho Rep. She is a proud graduate of Muhlenberg College. www.betweentwoboroughs.com

Rachel Birnbaum is a Brooklyn-based producer and designer. She currently heads up vertical expansion at TodayTix working with non-traditional theater and other performing arts partners. Proud graduate of Northwestern University.

Leysan Timirboulatova is fresh out of Sarah Lawrence College is a creative producer and performer. She’s recently worked on The Talking Band’s Fusiform Gyrus at HERE, a current line producer for The New Group’s new discussion series New Group Now and a line producer for SoftFocus, a theatre incubator for the digital age.