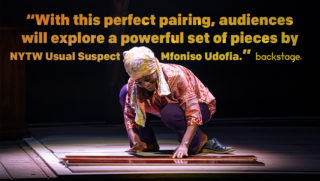 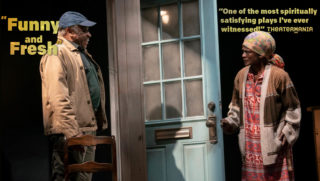 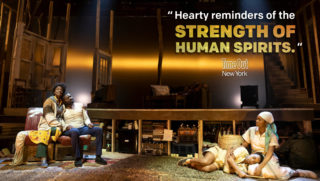 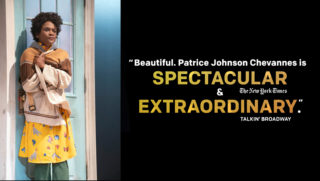 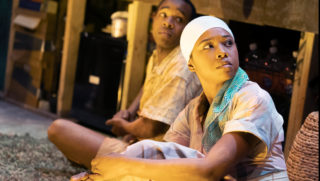 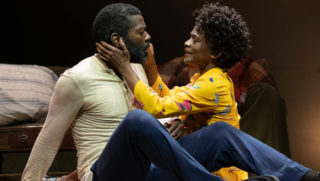 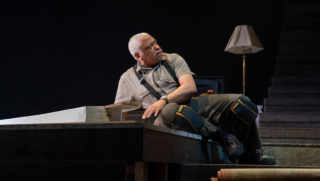 By Mfoniso Udofia
Directed by Loretta Greco and Awoye Timpo

runboyrun & In Old Age ran approximately three and a half hours, including one intermisison.

Generous production support provided by Thérèse Esperdy & Robert Neborak and Kate & Steve Howe. This project is supported in part by the National Endowment for the Arts.

After captivating audiences and critics in 2017, NYTW Usual Suspect Mfoniso Udofia returns with another pairing from her powerful nine-part saga, The Ufot Cycle.

Set in the family’s present-day Worcester home and 1968 Nigeria, runboyrun and IN OLD AGE pose questions about how to move forward when the past inhabits your very foundation. In runboyrun, Disciple and Abasiama Ufot have been living the same day over and over again for decades until the dam breaks and time rushes forward while also reeling backwards. They must uncover years of memories and cross great distances to find each other and unearth the roots of their marriage. IN OLD AGE follows Abasiama far into the future as she learns the true nature of love just as life takes a new turn.

Loretta Greco and Awoye Timpo direct these two plays presented together as one evening of theatre.

These two new chapters build on the 2017 productions of Sojourners and Her Portmanteau, celebrating the tenacious matriarch of a Nigerian family. 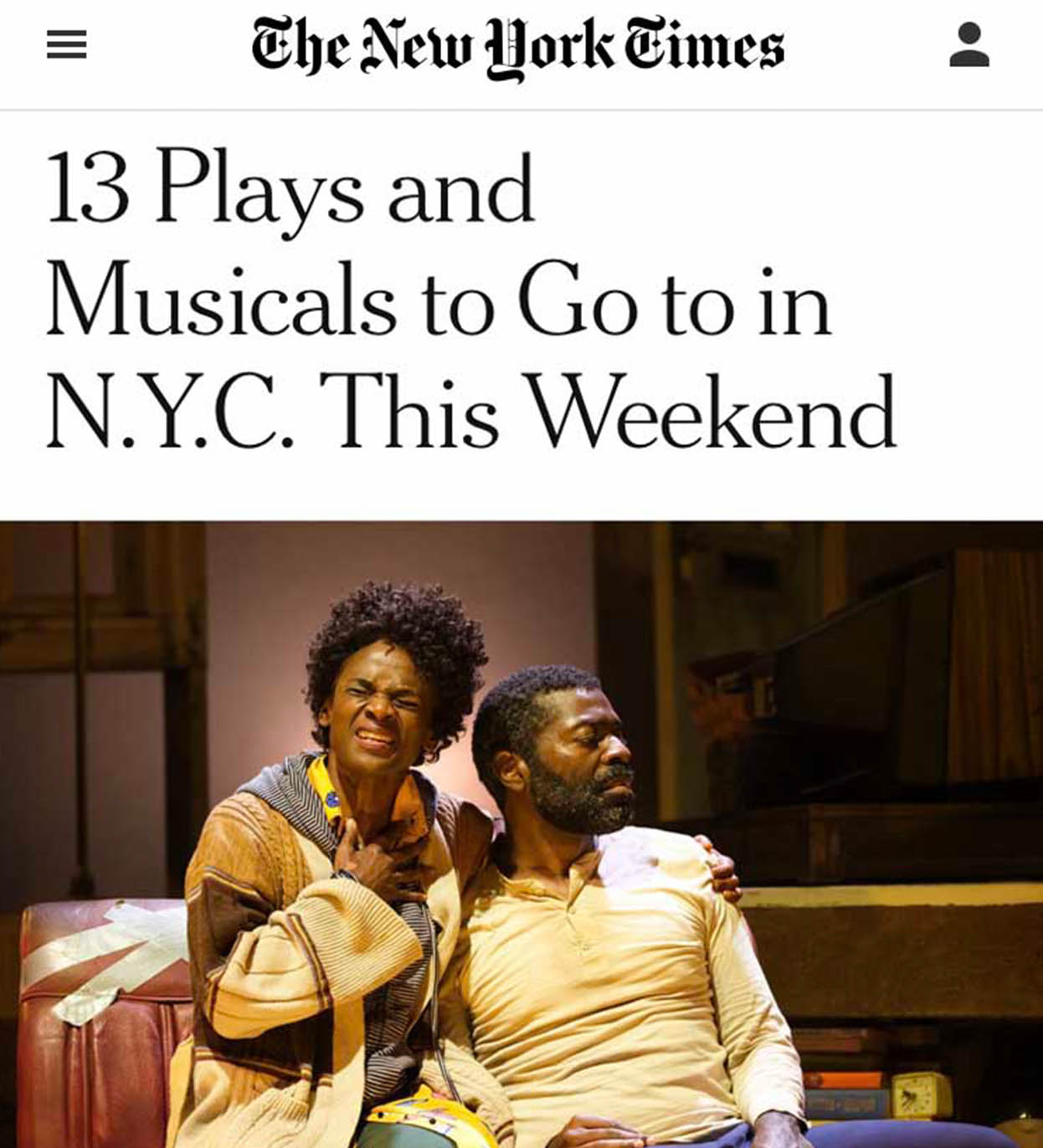 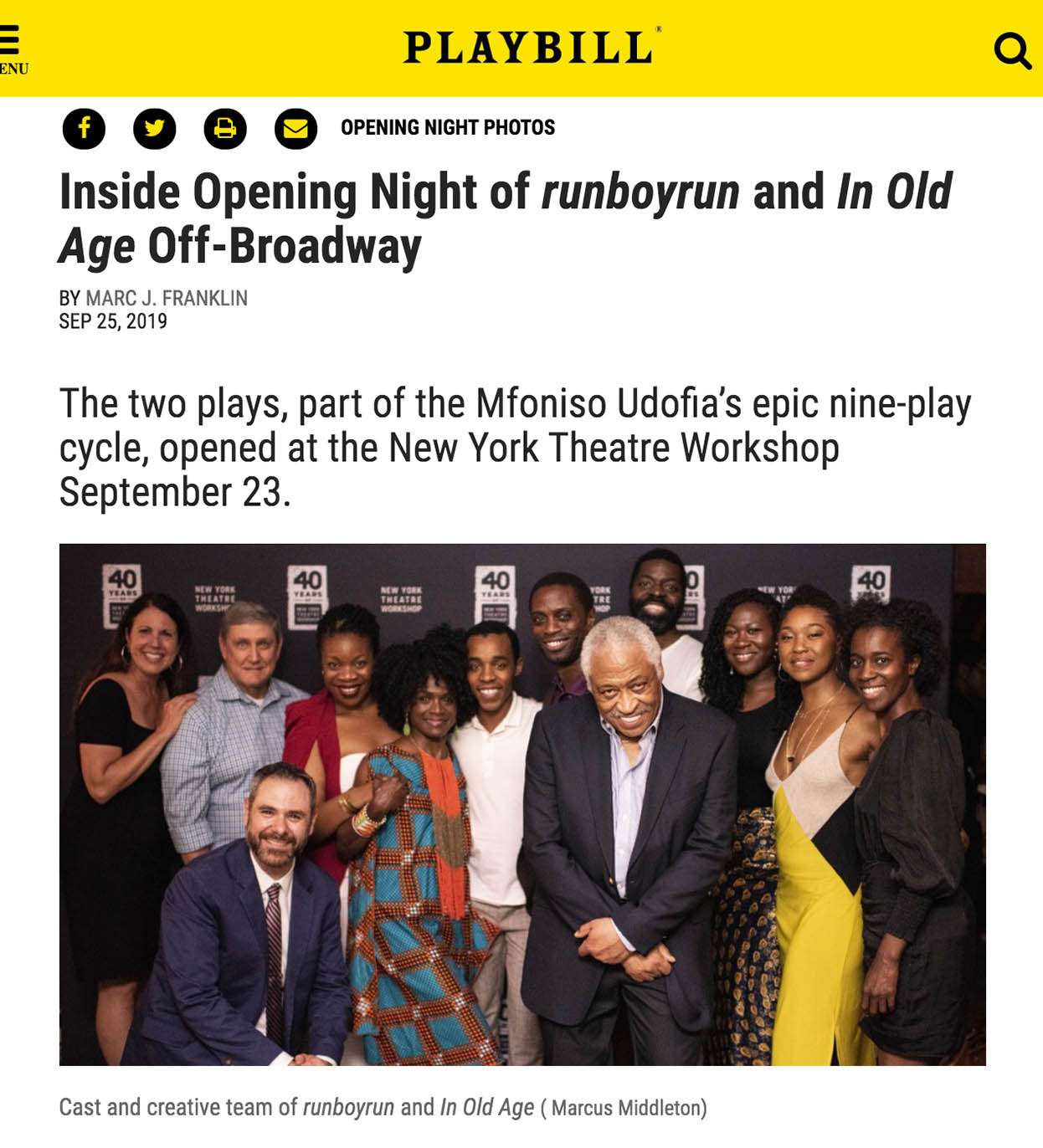 LORETTA GRECO is in her eleventh season as Magic Theatre’s Artistic Director, where she has proudly developed and premiered Taylor Mac’s Hir; Luis Alfaro’s Oedipus El Rey and Bruja; Mfoniso Udofia’s runboyrun and In Old Age; Sharr White’s Annapurna; Lloyd Suh’s American Hwangap and Jesus in India; and Octavio Solis’s Se Llama Cristina. Directing credits at Magic include Luis Alfaro’s Oedipus el Rey, Sharr White’s The Other Place, and the revival of Sam Shepard’s Fool for Love. New York directing premieres include Tracey Scott Wilson’s The Story, Ruben Santiago Hudson’s Lackawanna Blues, and Nilo Cruz’s Two Sisters and a Piano at NYSF/The Public; Toni Press Coffman’s Touch; Emily Mann’s Meshugah at Naked Angels; and Nilo Cruz’s A Park in Our House at NYTW. Regional directing credits include Life is a Dream at CalShakes; Speed-the-Plow, Blackbird, and Sweat at ACT; Romeo and Juliet and Stop Kiss at OSF; and numerous productions in regional theatres across the country. She directed the national tour of Emily Mann’s Having Our Say. Greco has developed work with writers at Sundance, The O’Neill, New Dramatists, and The Public. Prior to her Magic post, she served as Producing Artistic Director of WP Theater and produced the work of Lisa D’Amour, Katie Pearl, Diane Paulus, Karen Hartman, Lynn Nottage, Tanya Barfield, and Rinne Groff. As Associate Director/Resident Producer at the McCarter, Ms. Greco launched their Second Stage-On-Stage Festival of New Work. Ms. Greco received her MFA from Catholic University, and honors include the Sundance Fellowship, Princess Grace Award, and the 2018 SDC Fichandler Award.