A Republic in Three Monologues (Part 2) 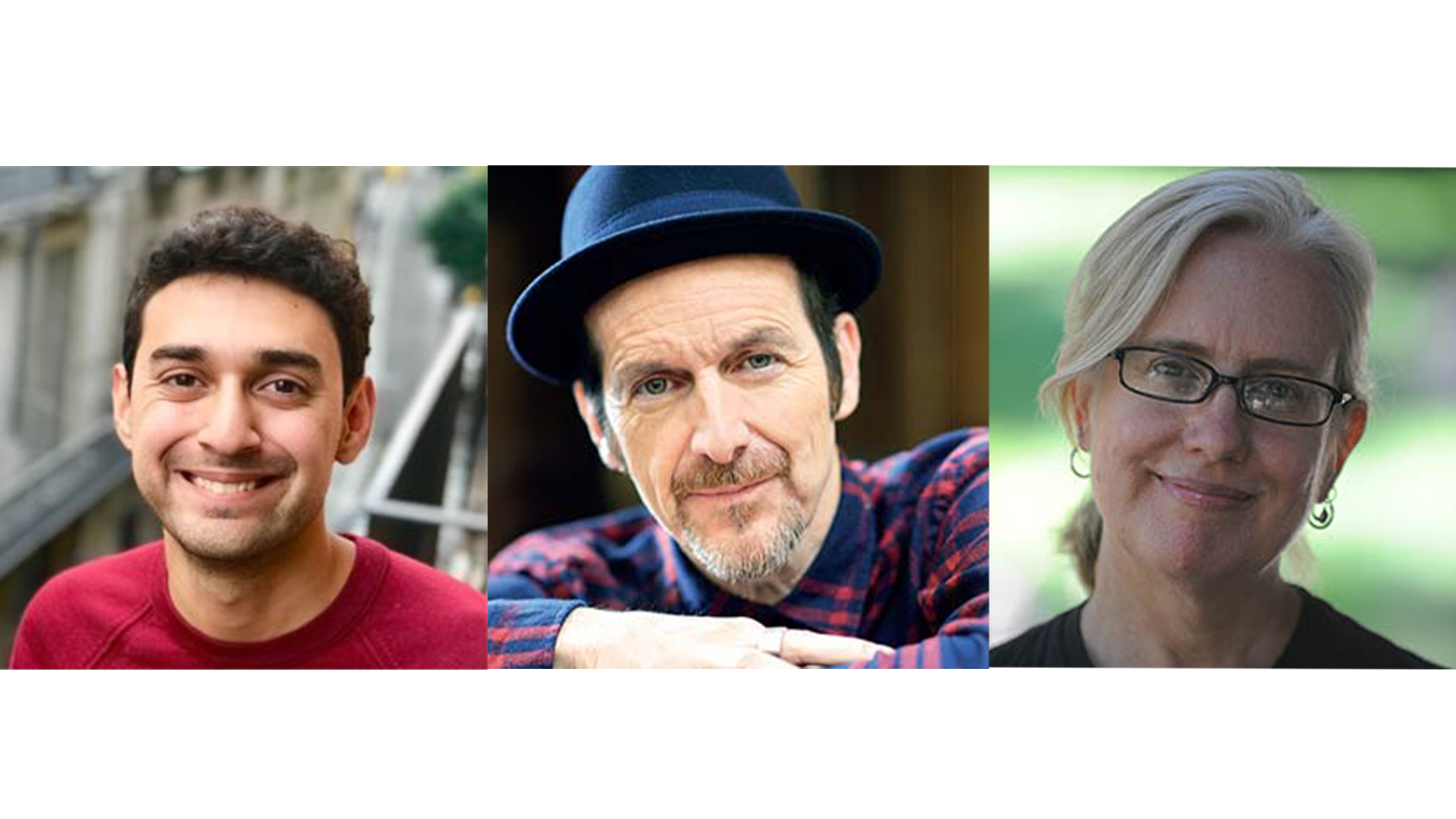 In Part Two of his conversation with Denis O’Hare and Lisa Peterson, Alexi Chacón recaps his experience of verbatim theatre with the authors, and they ponder the future of the piece What The Hell is A Republic, Anyway?, and well as the future of the American Republic.

ALEXI: Thank you for joining me in writing a piece of verbatim theatre. The oral history I chose reminded me of the discussion you two had with audience members for Episode Two, asking people how they defined citizenship and what they thought it meant. My piece of verbatim theatre draws on my experiences as a community organizer. I really identified with Mary’s desire to understand how to create the conditions needed to nourish a healthy democracy. Based on the monologues that you two created, what would be one line in each of your pieces that could not be cut out?

DENIS: I don’t know if I can get to a line. It’s the idea that there’s a human possibility. The word dream, that’s always been a big theme for me that I’ve never understood as a kid, or even as an adult. I have no patriotism. I don’t love America, I don’t. And I’ve never understood the passion for a country. I don’t connect to it, I connect to humanity. What’s true for me is what I have in common with other human beings.

LISA: Yeah, that’s a tricky assignment. The thing that just keeps jumping out at me is this action, the word came into my vocabulary, because it’s one thing to read and have thoughts and ideas. It’s one thing to talk a lot about ideas. But this basic notion that she’s describing, which leads her to just get up on the car, Dennis, your choice to include that in your monologue was really smart.

To me, this is very moving, because  in order to have an active citizenry, I personally think the only hope for a republic or a democracy like ours is that more people have the conversion that she’s describing, where she begins to believe that her actions matter. We have to believe that the action we take is worthwhile. And so to me, the word action has a lot of promise in it.

ALEXI: Mary Lou wolf talks about the importance of open forums in her oral history when describing her definition of citizenship and democracy. Your show provides a forum for audience members to discuss exactly the same topics.  However, your audience tended to represent white liberalism and often expressed views that directly aligned with the characters in your show. Do you think your show was strengthened or weakened by having an audience that did not represent the full breadth of American society?

DENIS: We talked about that a lot. And one of our fantasies was that, because it was on Zoom, we could get an audience from anywhere. So early on, I said, Oh, my God, w we got to get people who disagree with us, we got to get Trump voters. We have to, because I was interested in that dramatic possibility of not having a room where we are all safely assuming that everything we say will be agreed with. A bigger problem with American theater is that we tend to have a very specific demographic, and we did not manage to reach outside that demographic. We wanted to have a more diverse audience in terms of, if nothing else, political opinion, geographical location.

LISA: Over the weeks, it became clear who the audience was. We didn’t go into it knowing who the audience would be. We had developed at least the first episode with Dartmouth students over the summer and in the fall, we had dress rehearsals. We asked New York Theatre Workshop to give us a group of 20 people that we could try things out on. That group was young. I think that the most successful encounters or moments in the piece was when there was one primary group, privileged, white, progressive, regular audience members in New York Theatre Workshop. And then there was a small subset of young people who were students of the theater. When those two groups could encounter each other, that felt the most exciting to me.

There were also folks that didn’t have a quote unquote ticket, who were watching from the outside. They weren’t there in the room live. If you had a ticket, you were in the Zoom meeting, if not you could watch through Facebook and other platforms. Those that did not have a paid ticket  could watch it, but not participate. And that makes me uneasy, actually, now that you’re asking. That’s not great. It’s not. The fact that you had to pay $10 to get in to talk is not not really open democracy is it?

ALEXI:I think that’s an interesting point that Lisa brought up about the two tiers of participation based on payment. It’s almost ironic. I would have enjoyed seeing the two of you navigating this show with a conservative audience.  Dennis mentioned earlier that some might feel alienated by theatre. Performing a whole show based on primary documents could be alienating to some. If this is a weakness, then what are some strengths of using primary documents in theatre?

DENIS: I think part of it is how you frame it, and how you pitch it, how you sell it. You don’t sell it that way. You say, come and watch a show about America. And we’re going to show you how everything that is happening has already been predicted. There are prophecies and we’re gonna read the prophecies to you. You can pitch it any way you want to., I think primary sources are so important given the way in which we now have this culture where everybody thinks that everything is fake. It’s even more important that we understand that there is such a thing as, a more secure truth. I’m not even gonna say truth because these primary documents themselves are troubling.

LISA: It feels like you’re touching the past. To me, it’s deep, because over the five episodes we would have Anna Morton, who really is our dramaturg on the project, enter to say, “I would like to read a primary document”, which is what a dramaturg does. It was always a great relief to me when those moments would happen because it meant that she was letting us remember that hundreds and hundreds and hundreds of years ago, somebody had this idea. And I do believe that bit by bit maybe not in a straight line, but in some kind of a form, human organization improves bit by bit, and that it’s essential that we are aware of where the ideas came from. There’s also something very moving to me about finding alignment with an idea that is ancient, or seems ancient. I think that people think that that’s boring, but if they’re taken through it in a dramatic way, you know, they can experience it and go “oh, that’s not so dense or thick.”

ALEXI: There’s six hours worth of episodes, is this piece in its final state? Or is this something that will continuously go on as current events keep unfolding? It would be useful to have an inauguration episode.

DENIS: Well, I wish there was an inauguration episode, I pitched it to New York Theatre Workshop, but I think they’ve had enough of us. I mean, this piece actually was an offshoot of a play we’ve been working on for a few years, called Song of Rome, which is us talking about government, and how we choose to organize ourselves. We think of it as a companion to An Iliad. We set it aside for almost a year to do this. Once we had finished the fifth episode, we went back. It’ll be a monologue  for a woman to perform. Someday when we can be back in the theater I would love to do more of these episodes.

God knows there’s no end of interesting comparisons between our country and the Roman Republic. there’s always more  depending on what happens for example, we could do an episode about the plagues. Because we never did that. We just didn’t, because the election was the looming thing that we were thinking about. Now, hopefully, maybe we’re past the moment where anyone even wants to think about Roman plagues and what effect they had. But who knows, I mean, this thing is not over.

ALEXI: Do you think the founding fathers were right to base their design of the US government off of the Roman Republic?

DENIS: Yeah, I’m with you. I greatly admire the Roman Republic, and Roman culture in general, there’s some amazing things about it. Right now, I’m reading about Napoleon with my son. And Napoleon did some great things. He did some really awful things too. He had some really revolutionary ideas about equal rights. The Napoleonic code for its time was incredibly progressive, considering what it gave to women. I think we mythologize and worship the founding fathers way too much. And I think the Constitution is a deeply flawed document, I don’t think it’s worthy of the worship that it has, I think we’d all be better off as a country, if we realize it is a flawed human document that needs to be changed. It’s not etched in stone. It is very flawed. And the founding fathers were very flawed, that doesn’t mean that  everything they did was bad and wrong. Until we get over it, we’re not gonna get anywhere. We’ve made them untouchable.