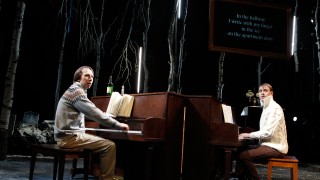 Three Pianos – the OBIE winning hit music-theatre event that wowed audiences and critics alike in its sold-out run at the Ontological-Hysteric Theater in March – is a theatrical explosion of Franz Schubert’s song cycle Winterreise. Filled with fantastical touches and inventive arrangements, Three Pianos is a colorful and imaginative evening of chaos, exploring Schubert’s music, life, and times. Written, arranged, and performed by Rick Burkhardt (Nonsense Company), Alec Duffy (Hoi Polloi) and Dave Malloy (Banana Bag & Bodice), the play is set on a blustery winter night on which three friends – each manning a piano – lead the audience through Schubert’s famous work. Performing the song cycle while grappling with fundamental questions about the nature of music and drinking way too much, the three pianists slip into a wild reenactment of a “Schubertiad,” a musical salon party thrown by Schubert and his friends, connecting the two groups through the centuries. An evening of hilarity and heartbreak unfolds, in which the audience is invited to the party – with complimentary wine. Compositional mayhem, shifting rivalries, and some unfortunate butchery of the German language ensue.