This is Modern Art 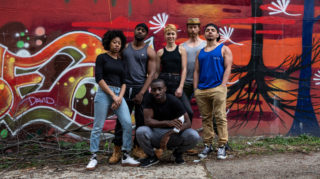 This is Modern Art

A team of artists who were never greeted inside the hallowed halls of the Art Institute of Chicago, decide to introduce themselves. They paint a fifty-foot graffiti piece on the towering wall of the New Modern Wing, asking us to reconsider what art is and where it belongs while bringing dire consequences on themselves. They are marginalized young men of color willing to risk everything to make their voices heard and prove that another paradigm is possible.

This acclaimed and controversial play, THIS IS MODERN ART, commissioned by Steppenwolf Theatre in Chicago and written by Idris Goodwin and Kevin Coval, makes its New York premiere under the direction of Jessica Burr.