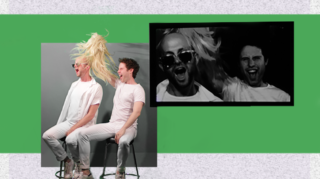 On screens across the world, women call themselves “Real Housewives” while they scream, sob, and scam their way to the top. Meanwhile, spiraling in shame in their bedrooms, Michael and Patrick clandestinely binge on the gaudy lives and savvy strategies of these expert performance artists. A raucous multimedia theatre work, This American Wife tracks Michael and Patrick’s obsessions with intimacy, queerness, and the deep desire to see and be seen.

Michael Breslin makes and supports work in theater and dance as a dramaturg, performer, and choreographer. His original work has been presented at the Queer New York International Arts Festival and the Yale Cabaret. An MFA candidate in dramaturgy at Yale School of Drama, he has worked with Jeremy O. Harris, Emma Weinstein, Alex Lubischer, and Aneesha Kudtarkar. He co-produced his first short film, Candace by Emma Weinstein and Stella Baker, in 2017. www.michaelstevenbreslin.com

Patrick Foley is a recent graduate of Yale School of Drama where he received an MFA in Acting. In New York, he has performed at Incubator Arts, Judson Memorial Church, and the McKittrick, among other places. Regionally, he has performed at Chautauqua Theatre Company, Yale Repertory Theater, Shakespeare on the Sound, Shakespeare Theatre Company, and Signature Theatre. BFA, NYU’s Tisch School of the Arts. www.patrickmfoley.com