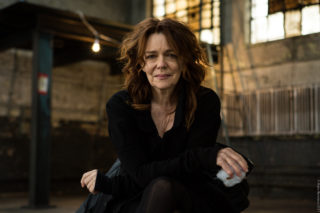 “Deirdre O’Connell’s performance will leave you speechless…TERMINUS is exactly what this country needs right now.” YesBroadway.com

“…a masterful work of great power and beauty.” Broadwayworld.com

TERMINUS tells the story of Eller–a progressive white matriarch–and her mixed-race grandson, Jaybo, who live together down by the railroad tracks in rural Georgia. When Eller’s mind begins to fade, her violent past in the segregated South haunts her from the very walls of the old family home. And as she descends terrifyingly closer toward a horrifying truth, Jaybo’s capacity to love his grandmother is put to the test.

In a lyrical style that blends psychological realism with expressionism, TERMINUS is a family drama that metaphorically asks how are white Americans haunted by and continually complicit in the sustained trauma against black Americans.

Gabriel Jason Dean is a Usual Suspect at New York Theatre Workshop and Associate Artist with Monk Parrots. His plays include In Bloom (workshopped through NYTW Dartmouth Retreats 2012 & 2013, Kennedy Center Paula Vogel Award, Laurents / Hatcher Award Finalist, Princess Grace Award Runner Up); Terminus (Austin Critics Table Award, B. Iden Payne Awards for Best Drama and Original Script), Qualities of Starlight (Broadway Blacklist, Kesselring Nomination, B. Iden Payne Awards for Best Comedy and Original Script), Heartland (NNPN Smith Prize Runner Up) and others. He was most recently named a Finalist for the Humanitas Emerging TV Writer Award for his original pilot, “We Belong.” He is a recipient of the Hodder Fellowship from Princeton, the Dramatist’s Guild Fellowship, an Affiliated Writer at the Playwrights’ Center and an alum of the Civilians R&D Group. His plays have been produced or developed at Manhattan Theatre Club, McCarter Theatre, The Flea, Oregon Shakespeare, The Kennedy Center, Geva Theatre, PlayPenn, Interact, Stage Left, The VORTEX, Theatre [502], Aurora Theatre, Seattle Children’s Theatre, Actor’s Express, Source Festival and others. MFA: UT-Austin Michener Center for Writers. GabrielJasonDean.com.

Monk Parrots is a seven-year-old ensemble of performing and visual artists who create concept driven live work through multidisciplinary collaboration ranging from the experimental to the scripted both musically inspired and inspired by the events of the world. Luke Leonard (founding Co-Artistic Director) and Jessica Dean (Co-Artistic Director) aim to cultivate new audiences for new forms, provide opportunities for artists, and forge uncommon unions that enrich our practice and broaden our relationships with professional artists and community members.
MonkParrots.org.

D’Vaughn Agu is a New York based designer for stage and film. He’s excited for his first production with Monk Parrots and to be collaborating with director Lucie Tiberghien and the rest of the production team. His previous work has been seen at the Connelly Theatre, Camino Real; NYTW’s Fourth Street Theatre, Lone Star Spirits; TheatreLab, Remains; and HEREArts, The Black History Museum According to the United States. D’Vaughn received his MFA in design from NYU|Tisch. www.dvaughnagu.com

Paul Brill has received three Emmy Award nominations for his film scores and recently won the first-ever Best Music Award from the International Documentary Association. He collaborated with rock legends U2 on the HBO film, Burma Soldier, composing a new string arrangement for an acoustic version of their classic song, “Walk On.” His recent work includes the hit documentary, Joan Rivers: A Piece of Work (IFC), the Emmy Award-winning Page One: Inside the NY Times (Magnolia), the Sundance Festival winning films, Gideon’s Army, Trapped, and Love Free or Die, and the Emmy, DuPont and Peabody Award-winning, 6-hour PBS documentary, The African Americans: Many Rivers to Cross, with noted historian Henry Louis Gates and additional musical contributions from Wynton Marsalis. Selections of his recent compositions will be performed and featured by Phoenix Chamber Music Society this coming March, 2018. www.paulbrill.com

Alex is originally from Houston, Texas where he was the Company Management Associate at Theatre Under the Stars. Alex’s previous management work included shows in St. Louis, D.C., NYC, and Houston.

Gabrielle Randle is a graduate student, director, and dramaturg currently based in Chicago. She has a BA in Drama from Stanford University and an MA in Performance as Public Practice from The University of Texas at Austin. She has worked across the United States including Off-Broadway and internationally on three continents. In Chicago she has worked with Sideshow Theatre Company, Chicago Dramatists, Victory Gardens, Oracle Theatre and Court Theatre. She is a second year PhD student at Northwestern in The Interdisciplinary PhD in Theatre and Drama.