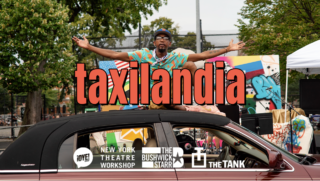 Created and written by Modesto Flako Jimenez
Produced by Oye Group, New York Theatre Workshop & The Bushwick Starr in association with The Tank

Taxilandia, created and written by Oye Group’s Modesto Flako Jimenez, immerses its audience in the flavors, sounds, sights and dynamic history of a neighborhood confronting social stigmas and the realities of gentrification. Weaving a dramatic, performative ‘tapestry’ that interconnects generations, social classes, races and cultures, Taxilandia complicates our notion of what it means to be a local, an immigrant or a resident of a place, challenging us to answer: “What is my personal roadmap of home?”

Originally developed in Jimenez’s own neighborhood of Bushwick, Brooklyn, the piece was inspired and drawn from his nine years driving a taxicab and his documentation of conversations with passengers, residents, locals, and immigrants to the neighborhood. The Oye Group now works with companies all over the country to develop local versions of the piece specific to each city.

VIRTUAL SALONS: From March 8-20, 2021, Flako hosted four salons with local artists from each borough whose work intersects with gentrification.

TAXILANDIA GALLERY: An opportunity to experience the past and present of Bushwick. While walking the neighborhood, guests will take in the sights, sounds and history of the barrio—the part Vogue wasn’t talking about. Each installation features original poetry, video and sound design work, and is based at a local business that is an important patch in the fabric of an ever-changing neighborhood.  For more information, visit www.taxilandia.com/gallery. EXTENDED THROUGH SEPTEMBER 30, 2021.

TEXTILANDIA: Come walk the streets of Bushwick with Flako! Co-created by Modesto Flako Jimenez and Andrew Kircher, Textilandia is a new text message experience that invites you to traverse these blocks haunted with a deep history of conflict, perseverance and joy. And to recognize how you inscribe yourself wherever you go. All you need is your phone, your body and a comfortable pair of shoes. Flako will be your guide, teaching you to peep the traces of gentrification. EXTENDED THROUGH SEPTEMBER 30, 2021.

Oye Group is a Brooklyn-based Production Company that serves as an incubator for artists both local and immigrant to New York City. We present an eclectic mix of theater, dance, poetry, music, video installations and film, through festivals and productions. They curate work that sparks a dialogue over political and social issues critical to our community’s growth. They work with emerging artists to create, play, and grow in an environment that challenges and supports them. They also provide quality arts education programming that gives our Brooklyn Community the tools to generate forward-thinking art. www.oyegroup.org

The Bushwick Starr is an Obie Award winning non profit theater that presents an annual Season of new performance work. We are an organization defined by both our artists and our community, and since 2007, we have grown into a thriving theatrical venue, a vital neighborhood arts center, and a destination for exciting and engaging performance. We provide a springboard for emerging professional artists to make career-defining leaps, and we are a sanctuary where established performance companies come to experiment and innovate. We are also a neighborhood playhouse, serving our Bushwick, Brooklyn community’s diverse artistic needs and impulses. Our past Seasons have included new work from groundbreaking artists such as Jeremy O. Harris, Heather Christian, Diana Oh, The Mad Ones, Clare Barron, Phillip Howze, Dave Malloy, Daniel Fish, Haruna Lee, and the TEAM. www.thebushwickstarr.org

Founded in 2003, The Tank is an Obie Award-winning, multi-disciplinary non-profit arts presenter and producer, which provides a home to emerging artists working across all disciplines, including theater, comedy, dance, film, music, puppetry, and storytelling. Led by Artistic Director Meghan Finn, Managing Producer Danielle Monica Long King and Director of Artistic Development Johnny G. Lloyd, The Tank champions emerging artists engaged in the pursuit of new ideas and forms of expression. In doing so the company removes the economic barriers from the creation of new work for artists launching their careers and experimenting within their art form. From the company’s home with two theaters on 36th Street, The Tank serves over 2,500 artists every year, presents over 1,000 performances, and welcomes 36,000 audience members annually. The company fully produces a curated season of 13-18 theatrical World or New York premieres each season. During the ongoing COVID-19 public health crisis, The Tank has launched CyberTank, a virtual gathering space and programming platform for artists to share work. With weekly themed variety shows, ongoing series and evening-length shows made for the virtual frame, CyberTank has already presented the work of over 2,101 artists in over 270 performances to over 12,844 audience members across the country and the world.