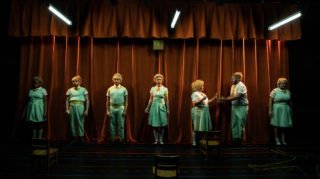 SKINNAMARINK is based on “McGuffey’s Eclectic Readers,” a series of American schoolbooks used to teach children how to read from the 1830s to today (yes, to today). Pre-dating the pastel-colored/everybody-happy world of “Dick and Jane,” these brutal little books helped shaped the minds and behaviors of Americans for generations.

The simple, rich language of these primers and their blatant, moralistic underpinnings launched us to question our current mess of American belief-systems: How were you taught to read? To think? To behave? How were you punished? What is your relationship to authority? To discipline? To shame?

Transforming New York Theatre Workshop’s 4th Street Theatre into our own little one-room schoolhouse of horrors, SKINNAMARINK questions what kind of people are the most useful in society…and how we handle the rest.

***Allergy warning: peanut butter will be used in this performance.***

This production has received developmental support as part of the 2018 Impact Residency Program of the Drama League and LaGuardia Performing Arts Center, and through artist residencies with Drop, Forge & Tool in Hudson, NY.

The Peanut Butter Show, a companion piece to SKINNAMARINK, was the inaugural production of Target Margin Theater’s Presenting Program at THE DOXSEE in Sunset Park, Brooklyn in October 2018, and was developed with support from Target Margin’s Artist Residency Program.

Michael Levinton is a writer, director, performer, and creator of original work for the theater. As Founder and Artistic Director of Little Lord, he has developed and premiered ten original productions at venues such as Abrons Arts Center, Bushwick Starr, Chocolate Factory, HERE Arts Center, Incubator Arts Project, OHIO Theatre’s Ice Factory, Judson Church, Dixon Place, Target Margin Theater, and UNDER St. Marks. Layering avant-garde techniques with ransacked camp traditions, Levinton’s work with Little Lord has been praised as “eerie and dangerous,” “a beautiful, uncomfortable, hallucinogenic ride,” and “a fever dream that straddles the line between ecstatic and tragic.” In addition to Little Lord, Michael Levinton is a producer, curator, and non-profit management consultant, and has worked with dozens of NYC performing arts companies in generating and growing new artistic programs. He is a 2018 Drama League Resident and an associate artist of Target Margin Theater.