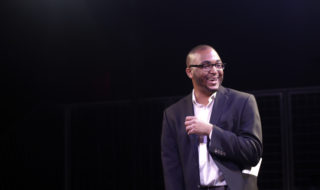 75 minutes with no intermission.

A young Black man from Brooklyn living in “post-racial America” hosts his own Homegoing service as a way for himself to prepare to die and to honor the memory of the unarmed Black Men and Women who have and are still being murdered by the police at a heartbreaking pace. This piece removes the mask of the perceived “superpredator,” by weaving together original poetry and acapella songs to theatricalize and articulate the vulnerability of a young Black man at risk of becoming the next trending hashtag as the country consumes his digital lynching.

Kareem M. Lucas is a Brooklyn born and Harlem based Actor/Writer/Producer/Director. His solo pieces include The Maturation of an Inconvenient Negro, From Brooklyn With Love, RATED BLACK, A Boy & His Bow, and Black Is Beautiful, But It Ain’t Always Pretty. He has performed his solo work at Snug Harbor Cultural Center, The Center for Arts & Culture at Restoration, Harlem School of the Arts, Flushing Town Hall, Pregones Theater, The Greene Space, Aaron Davis Hall at City College, The Town Hall, The Fire This Time Festival, IRT Theater, The Slipper Room, Teatro Circulo, Studio Tisch at NYU Grad Acting, Jimmy’s No. 43, MAGIC TIME at Judson Arts Wednesdays, and The Public Theater. He is currently co-collaborating on the development of the immersive theatrical piece The Black History Museum… According to the United States of America, as a writer and performer with the Smoke & Mirrors Collaborative as a part of their Residency at HERE Arts Center. And, just finished the Devised Theater Working Group, a residency program of the DTI/Devised Theater Initiative at The Public Theater, which included showings of his solo piece Black Is Beautiful, But It Ain’t Always Pretty in the 2018 Under The Radar Festival. Plus, he’s a teaching artist with The Classical Theatre of Harlem, and The 52nd Street Project. MFA: NYU Graduate Acting Program. For more info you can visit www.KareemMLucas.com or follow him on Instagram @KareemMLucas

Matthew Henao is a New York-based free-lance Stage Manager and Production Manager. Although a bit far from his home in the tropical oasis that is Miami, FL, he is delighted to be working in NYC again. A proud graduate from The University of Florida, he has recently completed the Stage Management Apprenticeship at The Juilliard School and has also worked as a Stage Management Intern for Wicked on Broadway. He stands proudly on the shoulders of giants and works hard to be deserving of the love and support of his close friends, family, and peers.