objects in mirror AR closer than they appear 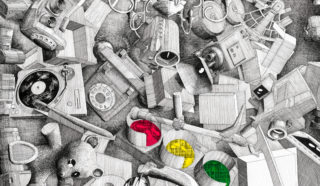 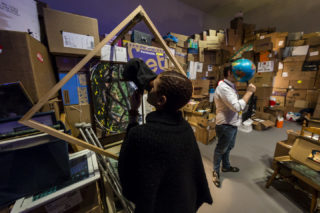 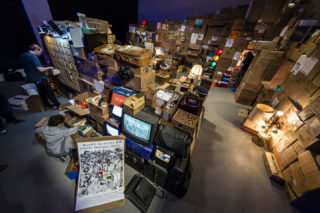 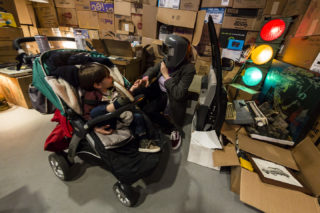 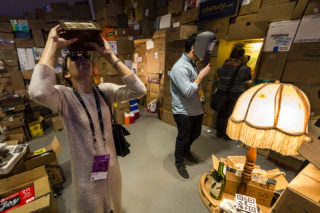 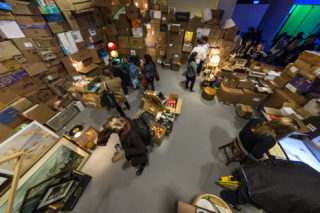 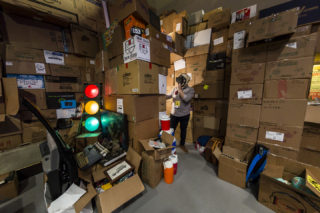 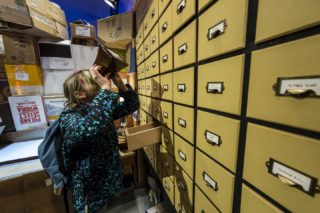 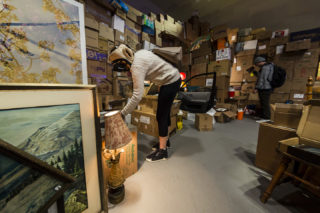 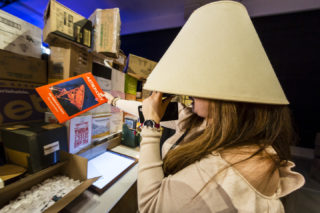 objects in mirror AR closer than they appear

Open to all ages!

Enter a world of chance and new imaginative possibilities through this interactive new media installation based on the critically-acclaimed theatrical performance THE OBJECT LESSON by Geoff Sobelle!

In the year since it was on the NYTW stage, a team of artists and innovators have pushed the boundary between technology and live performance, first with subject:object, a 360’ short film, and now with a full interactive new-media installation straight from the sold-out run at Tribeca Storyscapes, the interactive media division of the Tribeca Film Festival.

Created by Graham Sack, Geoff Sobelle, John Fitzgerald, and Matthew Niederhauser, objects in mirror AR closer than they appear fuses augmented reality technology with an immersive theater installation, inviting audiences to reflect on the relationship between new media and archaic objects; 21st-century technology and 19th-century magic; and memory and optical illusion. The piece creates a philosophical playground to explore the shifting relationship between images, memories, and things.

Technical Direction by The Molecule and Sensorium

In association with Reagent Media

Graham Sack is an award-winning screenwriter, director, and academic working in film, new media, and theater. Graham wrote and directed a VR experience for New York Times VR based on LINCOLN IN THE BARDO, the novel by acclaimed author George Saunders, which was shortlisted for an Interactive Emmy. Graham’s most recent screenplay, SEPTILLION TO ONE, made the celebrated Hollywood “Blacklist,” sold in one of the most competitive spec sales of the year, and is scheduled to go into production with IM Global / Open Road. He just released the pilot episode of a new VR episodic series based on Freud’s case studies titled THE INTERPRETATION OF DREAMS in partnership with Samsung and is currently developing another narrative fiction VR episodic series for Felix and Paul Studios. Graham began his career as a child actor on Broadway, starring in Neil Simon’s Lost in Yonkers and in films such as Dunston Checks In and TV shows such as “Law & Order” and “New York Undercover.” Graham is a member of New Inc, the New Museum’s artist incubation program, and also holds a BA in from Harvard, an MSc from the London School of Economics, and is completing a PhD in Digital Humanities at Columbia University, where his research is focused on computational approaches to storytelling. He is a member of WGA, WGC, SAG, and AEA and is represented by the Gersh Agency.

John Fitzgerald is an award-winning filmmaker / artist / technologist and cofounder of the experiential studio, Sensorium. He has created interactive VR projects that have premiered at the past two Sundance Film Festivals in the New Frontier program, The Sky Is A Gap (2017) and Zikr: A Sufi Revival (2018), and an interactive AR theater installation that premiered at Tribeca Storyscapes objects in mirror AR closer than they appear (2018). He is also a visiting scholar at the MIT Media Lab’s Center for Advanced Urbanism and alumni of New Inc.

Matthew Niederhauser is an award-winning photojournalist, new media artist, and technologist who most recently co-founded the experiential studio, Sensorium. He is also a visiting scholar at the MIT Media Lab’s Center for Advanced Urbanism and alumnus of New Inc.

Aaron Amodt was born at Disney World, learned theater at Sea World, and spent his formative years touring with Ringling Brothers Circus. After criss-crossing the United States a few times, he ran away from the circus to join the New York theater community. Outside of theater, Aaron is a practitioner of alternative photographic processes, and a collector of personal ephemera. www.aaronamodt.com

Adam Blumenthal is a lighting and scenic designer based out of New York and Los Angeles. In addition he is a professional magician and the owner of Tannen’s Magic shop, the oldest and most professional magic shop in New York City. His work often spans bridges the gap between these two disciplines. New York credits include St. Ann’s Warehouse, Joe’s Pub, The Kitchen and the Theatre at St. Clements. Regionally he has worked at The Kodak Theatre, The Geffen Playhouse, The Los Angeles Theatre Center and East West Players, all in Los Angeles. As well as The Granada Theatre in Santa Barbara where he lit the world premiere of Dick Sherman’s (Mary Poppins composer/lyricist) new musical Pazzazz! He has served as the magic consultant on many productions including Catch Me If You Can on Broadway.

Jecca Barry is an opera and theatre producer based in Brooklyn, New York. She is Executive Director of Beth Morrison Projects (BMP) and a Co-Director of the PROTOTYPE Festival. With BMP she has commissioned, developed and toured new opera-theatre and music-theatre work to venues across the country and around the world. Recent projects include Anatomy Theater (David Lang/Mark Dion; LA Opera),Acquanetta (Michael Gordon/Deborah Artman; PROTOTYPE), Iron & Coal (Jeremy Schonfeld; Strathmore Hall) and HOME (Geoff Sobelle; BAM, New Zealand Festival). In addition, Jecca produces The Object Lesson, by Geoff Sobelle, that has toured extensively since 2014.

Jamie Boyle is a visual artist who frequently collaborates on the creation of material stuff for performances. Recent projects include Ann Hamilton and SITI Company, the theater is a blank page (UCLA Center for the Art of Performance, 2018); Jennifer Lacey and Wally Cardona, The Set Up (LMCC River to River Festival 2017); Faye Driscoll, Thank You for Coming: Play (Brooklyn Academy of Music, 2016; national tour 2017); and Ursula Eagly, Martín Lanz Landázuri, and Kohji Setoh, piece with gaps for each other (The Chocolate Factory, NY, 2017). She is currently an artist-in-residence at the Textile Arts Center in New York. www.jamieboyleandfriends.com

Steve Cuiffo creates unique performance, art, theater and magic. He is an actor and magician who makes solo, as well as, collaborative works with other artists and theater companies. His work incorporates aspects of sleight of hand, misdirection, imitation and re-eneactment.

Steven Dufala is a multidisciplinary artist based in Philadelphia, Pennsylvania. While he works primarily in collaboration with his brother Billy as The Dufala Brothers, he also works on as many other projects in as many other fields as possible, being drawn in particular to work that explores overlapping concerns of various disciplines. He makes drawings, clothes, furniture, prints, music, sculpture, photos, books, and thinks an awful lot about what all these things have in common and what on earth people do with them. Steven has been working intermittently in dance and theater as a designer for about 15 years, and over this time has worked with Pig Iron Theatre Company, Kate Watson Wallace, Lightning Rod Special, Thaddeus Phillips, Geoff Sobelle and others. With Billy, he shared an OBIE award for his work with Sobelle on machines machines machines machines machines machines machines, and shared a BESSIE award with the entire creative team for Sobelle’s The Object Lesson. Steven and Billy co-teach sculpture at the Pennsylvania Academy of the Fine Arts and are represented by the Fleisher-Ollman gallery in Philadelphia. Their work is in the collection of the Philadelphia Museum of Art, the West Collection, and many private collections.

Sarah Hughes is a director and producer of theater and new media. Her work embraces limitation, values accidental discoveries, and is deeply collaborative. She’s interested in using humor, awkwardness and unexpected choices in casting, staging, language and tone to create shared experiences that aim at truth rather than at the effect of reality. Sarah has developed new plays, performance art pieces, devised works, and immersive installations with Eliza Bent, McFeely Sam Goodman, Julia May Jonas / Nellie Tinder, Corinne Donly, MJ Kaufman, Cara Scarmack, Paul Cameron Hardy, Chana Porter, Pablo Helguera, MoMA, the Office for Creative Research, Vox Theater, Half Straddle, and Superhero Clubhouse, of which she is a Core Member. With Graham Sack and Sensorium she has created several Virtual Reality pieces for New York Theatre Workshop, The New York Times, and Penguin Random House. Sarah’s work has been seen at Abrons Arts Center, BAM Next Wave, The Bushwick Starr, JACK, The Tank, The Brick, The Segal Center, PEN World Voices, Columbia University, Signature Theater, The Flea, Prelude, and CATCH, among others. Sarah worked with Elevator Repair Service from 2007-14, assistant directing Gatz, The Select, Arguendo, Shuffle, and Fondly, Collette Richland off-Broadway and / or on tour, and was Co-Artistic Producer of Target Margin Theater from 2015-17. She co-teaches a class on Contemporary Theater at Dartmouth College, was a member of the 2016-17 Civilians R&D Lab and is a New Georges Affiliated Artist, a Target Margin Associated Artist, and a Clubbed Thumb 2017-18 Directing Fellow.

Chief StoryTelling Officer at ARVORE, Ricardo Lagnaro is considered one of the most innovative VR directors in the world. He created the full dome experience for Calatrava’s Museum of Tomorrow in Rio, directed 360º music videos and content projects that together have over 60 million views on the web, and was selected by Oculus to the program VR For Good, directing the VR doc “Step to the Line”, which premiered at the Tribeca Festival 2017 and was selected for FoST, Sheffield Doc/Fest amongst over 20 festivals globally. Time Magazine declared this piece as one of the five best contents in mobile VR of 2017. Due to his uniquely disruptive work, Ricardo was chosen as one of the opening speakers for the Global People’s Summit during the UN General Assembly in September 2017.

Founded in 2005, The Molecule is a creative studio based in New York and Los Angeles that crafts distinctive imagery for clients worldwide. Recent work in interactive and immersive experiences includes Lincoln in the Bardo VR (Sensorium), Invisible VR (30 Ninjas), Conan ComicCon VR (Team Coco), and OneWTC (Durst). Episodic and feature credits include Master of None (Netflix), The Affair (Showtime), Happy! (SyFy), Ballers (HBO), The Night Of (HBO), The Americans (FX), Queen Sugar (OWN), Rise (NBC), The Wall (2017), Money Monster (2016), A Most Violent Year (2014), Love & Mercy (2014), and Beasts of the Southern Wild (2012).

Elliot B. Quick is a producer, dramaturg, director, and educator. He is a founding member of the performance collective Piehole (www.pieholed.com), and his work as a freelance dramaturg and director has been seen at the Under the Radar’s Incoming Series, the Invisible Dog, the Ojai Playwrights Conference, The Sharon Playhouse, The Access Theater, The Fisher Center at Bard College, and the Edinburgh Festival Fringe. He received an MFA in Dramaturgy and Dramatic Criticism from the Yale School of Drama, and teaches theater history and playwriting at the Maggie Flanigan Studio.

Matt Romein is an artist and performer working at the intersection of live performance, generative computer art, and multimedia installation. Originally trained as an actor, he has worked extensively in NYC’s downtown theater and dance community as a sound and video designer while also making his own technology-centric live performances. He is a recent graduate of NYU Tisch School of the Arts ITP, a graduate program focusing on experimental and artistic uses of technology, where he also completed a research residency. He now teaches there as an adjunct professor with classes focused on live video performance and avatar focused interactive art.

Joseph Silovsky has been building machines for the theater for 20+ years. Robots (Rich Maxwell’s Joe), mechanized moving video screens (T.B.A’s Supervision), falling walls (Mimi Lien’s design for An Octoroon), and many other devices have been engineered and built at Silovsky Studios LLC. Artists and companies that Silovsky has collaborated with also include: Radiohole, the Wooster Group, Richard Foreman, Geoff Soebell, ERS, Paul Chan, Suzanne Bocanegra, Ripe Time, Basil Twist, James Hanaham, and many others.