EH DAH? QUESTIONS FOR MY FATHER 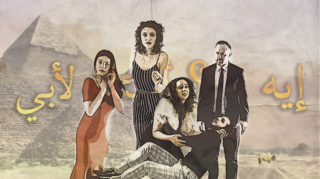 EH DAH? QUESTIONS FOR MY FATHER

RUNTIME
Approximately 105 minutes, with no intermission.

Recent credits include Fire in Dreamland at The Public Theater (sound design and original music), Balls with One Year Lease (Drama Desk Nomination), Catch as Catch Can with Page 73, Wild Abandon at Irish Rep, {my lingerie play} at Rattlestick, Beep Boop at HERE, Zurich with Colt Coeur, and Cowboy Bob at Ars Nova and NYS&F. Regional: Seascape, Heisenberg, The Unfortunates, John, The Hard Problem and Chester Bailey at American Conservatory Theater, Curious Incident at Kansas City Rep (sound design and original music), The War of The Roses, The Glass Menagerie and Othello at California Shakespeare Theater, and The Music Man at Sharon Playhouse.

AYA AZIZ is a writer, actor, and musician based in New York. She has brought original work to the New York Musical Festival, the Fringe, the Neofuturists, and Rattlestick Playwrights Theater’s New Songs Now, in addition to theaters in Beirut and Sarajevo. You can follow her and her music at ayaaziz.com or @ayaazizart.

Regional Theater: We’ve Come To Believe, The Corpse Washer, and How To Defend Yourself, for the Actor’s Theater Louisville (Humana Festival); Heartland at the Geva Theater; Off-Broadway: The Russian and The Jew at The Tank; Dead Are My People at NYTW’s Next Door Theater; Daybreak at the Beckett Theatre for the Pan Asian Repertory Theater; Freedom Riders at The Acorn Theater (NYMF). Other Theater: Pay No Attention To The Girl for Target Margin Theater; Alternating Currents for The Working Theater; Blood Wedding, The Last Days of Judas Iscariot, for The Atlantic Theater Company Stage 2; Unity 1918, Wayward at The Lee Strasberg Theatre and Film Institute; Evensong at the Astoria Performing Arts Center.

LAUREN MODIANO is a Brooklyn-based director and maker of theater and television. She is currently the Directing Fellow at Hypokrit Theatre Company. Recently, Lauren assistant-directed Inner Voices: Scaffolding (Premieres), served as the script supervisor for Live From Lincoln Center: Stars In Concert Series (PBS) and Great Performances (PBS), and directed the workshop of Tenn, a new musical about the life of Tennessee Williams, for the ASCAP musical theater workshop. Lauren is a recent graduate of Yale University, where she double-majored in American Studies and Theater Studies.

ARPITA MUKHERJEE is a New York-based director who works on new plays and musicals. She is the Artistic Director of the Congressional Award-winning Hypokrit Theatre Company and the Festival Chair of Tamasha for South Asian artists.

RACHEL SUSSMAN is an NYC-based creative producer and co-founder of The MITTEN Lab, an emerging theatre artist residency program in her native state of Michigan. From 2016-2018, she served as the Producing Artistic Director for the New York Musical Festival (NYMF), where she first encountered Eh Dah?. As an independent producer, she is represented on Broadway this spring with Heidi Schreck’s What the Constitution Means to Me. Recent: the Obie Award-winning The Woodsman (New World Stages/59E59). In development: a new musical about the American women’s suffrage movement by Shaina Taub. A former Women’s Project Lab Time Warner Foundation Fellow, Rachel is a graduate of the Commercial Theater Institute and a University Honors Scholar alumna of NYU Tisch. She is the recipient of the 2019 Geraldine Stutz T. Fellowship in Creative Producing, founded by Hal Prince in conjunction with Columbia University.  www.rachel-sussman.com

Here at Hypokrit Theatre Company, our mission is to encourage artistic inquiry by providing artists from minority communities a platform for their voices and work. We work towards shaping and molding the artists of tomorrow by encouraging original and groundbreaking voices that bring an innovative approach to the arts.

Founded in 2014 by Arpita Mukherjee and Shubhra Prakash, Hypokrit made waves by bringing a radically reimagined Bollywood version of Romeo and Juliet to Access Theater, earning the company a certificate of special recognition from Congresswoman Carolyn Maloney. Since then, Hypokrit has produced How to Succeed as an Ethnically Ambiguous Actor starring Zenobia Shroff from The Big Sick first at Paradise Factory and then in co-production with The Castillo Theatre and Eh Dah? Questions for my Father at NYMF. Eh Dah? was named one of the top 10 musicals at NYMF by Playbill and TIme Out, and was reviewed by the New York Times as “a celebration.”

Hypokrit strives to embody the rich cultural complexity of the world we live in through our work. Our work is culturally specific, but ultimately about the universality of the human experience. We are a company exclusively run by and wholly dedicated to minority communities. Read more about us here – www.hypokritnyc.org.