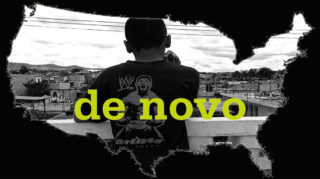 A work of art with REMARKABLE AUTHENTICITY!

Performed by a MAGNIFICENTLY TALENTED group of actors!

De Novo had me tearing up!” – Stage Buddy

On the streets of Guatemala City, gang members were Edgar’s only family.

But he dreamed of a different future.

To leave the gang was a death sentence.

Coming to the USA was his last hope.

Houses on the Moon presents an acclaimed documentary play, De Novo, as a part of the inaugural season of Next Door at New York Theater Workshop.

Crafted entirely from immigration court transcripts, interviews and letters, De Novo tells the true story of Edgar Chocoy, a teenaged boy from Guatemala who faced deportation after fleeing to the U.S. in order to escape the gang MS-13.

Edgar travels over 3,000 miles, across the borders of three countries, in search of his mother and a better life in the United States. Detained by the Department of Homeland Security, he pleads with a Colorado judge to grant him asylum and not deport him back to Guatemala where the gang was awaiting his return. “If I go back, they’ll kill me.”

is the co-founder of Houses on the Moon Theater Company. His previous works include Tara’s Crossing (world premiere at Tenement Theater, NY), Building Houses on the Moon (Lucille Lortel, NY), MotherSON (HERE Arts Center, Queens Theatre in the Park, Penguin Rep, Theatreworks in Melbourne, Australia and on London’s Off West End at both the New End and Oval House Theatre) and Santa Claus Is Coming Out (Kirk Theatre, NY). De Novo ran at 59E59 Theaters in the Americas Off-Broadway Festival and toured El Salvador in a full Spanish translation. Solomon wrote the teleplay for CityKids (Jim Henson Productions), which received an Emmy nomination for Best Children’s Special and won an Ollie Award for Excellence in Children’s Programming and was the staff writer for the series of the same name.  He was also a writer on “Tribeca” (Fox/Tri-Star), “Davis Rules” (Carsey Werner/ABC) and “Gullah-Gullah Island” (Nickelodeon).

An award-winning photojournalist with extensive experience covering Latin America, De Cesare is widely known for her coverage of the spread of Los Angeles gangs in Central America. She is currently the associate professor of photojournalism at the University of Texas at Austin, a member of the advisory board of the Knight Center for Journalism in the Americas and serves on the executive committee of the Dart Center for Journalism and Trauma.  De Cesare was recently awarded journalism’s oldest award, the Maria Moors Cabot Prize. Her newly published book Unsettled/Desasosiego: Children in a World of Gangs is both a memoir and a visual history of her experiences in Central America and Los Angeles. www.donnadecesare.com