A Benefit Reading of WHAT THE CONSTITUTION MEANS TO ME 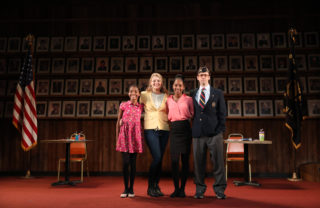 A Benefit Reading of WHAT THE CONSTITUTION MEANS TO ME

Heidi Schreck and the original Broadway cast of her Tony Award nominated and Pulitzer Prize finalist play What the Constitution Means to Me will reunite for a special one-night-only reading of the play to benefit The National Network of Abortion Funds at the historic Great Hall at Cooper Union (7 E 7th St, New York, NY 10003).

For over 150 years, The Great Hall has been New York’s epicenter of public debate and political discourse and eight US Presidents have spoken from the hall’s famed “Lincoln Lectern,” beginning with President Lincoln himself.

The National Network of Abortion Funds builds power with members to remove financial and logistical barriers to abortion access by centering people who have abortions and organizing at the intersections of racial, economic, and reproductive justice. Learn more at abortionfunds.org

Playwright Heidi Schreck’s boundary-breaking play breathes new life into our Constitution and imagines how it will shape the next generation of Americans. Fifteen year old Heidi earned her college tuition by winning Constitutional debate competitions across the United States. In this hilarious, hopeful, and achingly human new play, she resurrects her teenage self in order to trace the profound relationship between four generations of women and the founding document that shaped their lives.

Schreck’s timely and galvanizing play, directed by Oliver Butler, became a sensation off-Broadway at New York Theatre Workshop in 2018 before transferring to Broadway in 2019 and receiving two Tony Award® nominations among countless other accolades.  The New York Times hailed it as “not just the best play on Broadway, but also the most important.”

All attendees will be required to show proof of vaccination. In addition, a mask must be worn over the nose and mouth at all times inside the building and theatre. Attendees also must wear a surgical or KN95 (or similar) level mask, and if you need one, we will provide it at the point of entry.