A Chronicle of the Madness of Small Worlds 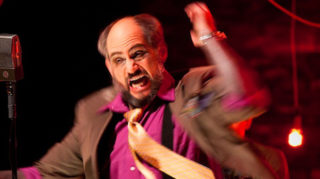 A Chronicle of the Madness of Small Worlds

Astrological disturbances split asteroids apart, and new smaller worlds hurtle into each other’s orbits. Loved ones are wrenched from one another, old animosities arise, and these asteroidal inhabitants soon forget they once lived as one world. Mass amnesia buries their shared history, and it seems impossible that these estranged neighbors ever coexisted peacefully. Will they now be able to reach across borders and share a world of difference? How can you deal with aliens when you feel alienated yourself?

A CHRONICLE OF THE MADNESS OF SMALL WORLDS pairs two short stories by eminent three-time Obie-winning playwright Mac Wellman, adapted for the stage by director Elena Araoz. Each story tells a fantastic and emotional tale of the imagined inhabitants of real asteroids in the asteroid belt. Wellman’s hysterical verbal acrobatics lay bare the madness of our own small world. Live music composed by Drama Desk-nominated touring artists, alongside Tony nominee Justin Townsend’s installation-style production design, coalesce into a vibrant and deliriously theatrical event.

Produced by Kathleen and Harvey Guion and Dan McCarthy

Mac Wellman is best known for his experimental work in the theater which rebels against theatrical conventions. He is author to more than forty plays, including Harm’s Way, The Self-Begotten, The Bad Infinity, Terminal Hip, Dracula, Whirligig, Crowbar, 7 Blowjobs, Murder of Crows and Description Beggared or the Allegory of Whiteness (2000). His recent productions include Bitter Bierce (Performance Space 122), Jennie Richee (Ridge Theater & the Arts at St. Ann), Anything’s Dream (Muhlenberg College), Antigone (Big Dance Company), 3 2’s; or AFAR (Dixon Place), 1965 UU for performer Paul Lazar and directed by Stephen Mellor (The Chocolate Factory) and The Offending Gesture (The Tank and 3-Legged Dog). In addition to several collaborations with composer/percussionist David Van Tieghem in the 1990s, he collaborated with Bang on a Can composer David Lang in 2006 and again more recently on the opera The Difficulty of Crossing a Field, adapted from a very short story by Ambrose Bierce. He has received grants from the National Endowment for the Arts, New York Foundation for the Arts, the Rockefeller Foundation, the McKnight Foundation, a Guggenheim Fellowship and a grant from the Foundation for Contemporary Arts. In 1990, he received an Obie award for Best New American Play (for Bad Penny, Terminal Hip and Crowbar). In 1991, he received another Obie award for Sincerity Forever, and in 2003, he received his third Obie award for Lifetime Achievement. He has received a Lila Wallace-Readers’ Digest Writers Award. His novel Linda Perdido won the 2011 FC2 Catherine Doctorow Prize for Innovative Fiction. He is a co-founder of The Flea Theater. He is the Donald I. Fine Professor of Play Writing at Brooklyn College, and in 2010, he became a CUNY Distinguished Professor. macwellman.com.

Anna McClellan has been a prolific songwriter since she was sixteen years old. A classically trained pianist, her work combines proper technique and her own unwavering and often heartbreaking voice. She’s toured all over the U.S with artists including Conor Oberst, Frankie Cosmos, opened for The Good Life at Bowery Ballroom and played at internationally renowned festival Hardly Strictly Bluegrass in San Francisco. She’s been a part of two music-theatre productions, both in Omaha, NE, McClellan’s hometown. The second of these two plays is Plastic Drastic, a play for family audiences created by Elena Araoz where the fate of climate change truly rests on the shoulders of two children. Anna currently lives in Brooklyn, NY, playing shows and preparing to release a record in early 2018.

Daniel Ocanto is a percussionist and composer from Omaha, Nebraska. He has toured nationally and internationally with a diverse range of groups and has contributed to multiple recordings as a studio musician. His recent touring and studio work has been with his band Big Harp (Los Angeles, CA), and as a session drummer for Anna McClellan (NY), Icky Blossoms (Omaha, NE), Nik Freitas (Los Angeles, CA) and Viva Violet (Los Angeles, CA). He was also part of an ensemble that provided a live score for Alfred Hitchcock’s silent film The Ring in collaboration with FilmStreams Omaha. His most recent work on the score of Hillary Bettis’ Alligator (The Sol Project/New Georges) earned him and his collaborators a 2017 Drama Desk Award nomination for Outstanding Music in a Play. Other theater work includes the scores to Mac Wellman pieces Wu World Woo (Sleeping Weazel at ArtsEmerson) and Muazzez (Great Plains Theater Conference). He currently resides in Brooklyn, New York.

Sean Smith is a trumpet player with 22 years experience. He is also a composer and arranger who studied Jazz and Composition at Western Carolina University (NC). He has toured regionally and nationally since 2004. He has recorded with: Athens, Georgia-based band Reptar, Yeasayer (NYC), Grant Green Jr. and the gospel world’s Reggie Parker. He was recently nominated for a Drama Desk Award for Outstanding Music in a Play for his work alongside Daniel Ocanto and Graham Ulicny in Hillary Bettis’ Alligator. He currently lives in Brooklyn, NY

Multi-instrumentalist Graham Ulicny has written, toured and recorded music in many capacities. As a founding member of Athens, GA-based band Reptar, he wrote and recorded four studio albums on major independent labels (Vagrant, Lucky Number, Joyful Noise) and has worked with acclaimed producers Ben Allen (Animal Collective, Gnarls Barkley, Belle and Sebastian) and Andy LeMaster (Now It’s Overhead, Bright Eyes, Azure Ray). He is also the current keyboardist of Omaha, NE-based band The Faint, with whom he has toured the US and Asia and recorded on new material released through Saddle Creek Records. He has also recorded and toured with Omaha-based band Icky Blossoms. He has performed at many large national festivals including Bonaroo, Governor’s Ball, Lollapalooza, Austin City Limits, Sasquatch, Fuck Yeah Fest, Beach Goth, Electric Forest, Wakarusa, and CMJ. In 2016, Graham collaborated with Elena Araoz on a production of her original work Plastic Drastic at the historic Rose Theater in Omaha, NE contributing live performance and original composition. He again collaborated with Araoz on the 2016 production of Hillary Bettis’ Alligator produced by New Georges and The Sol Project and was nominated for a Drama Desk Award for Outstanding Music in a Play. He also provided an original soundtrack to Nik Fackler’s (Lovely, Still) experimental film One Day, One Month, One Year. He is proficient on vocals, guitar, bass, keyboard, mandolin and electronic programming.