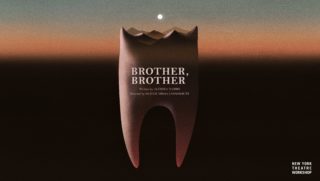 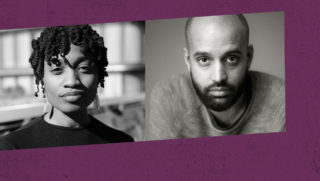 Jim and Wally are brothers traveling Appalachia by two-seater bicycle, stopping to play shows on their way to make it big in Tennessee. When a man in a maroon suit starts following them, they come face-to-face with their pasts. Playwright Aleshea Harris and director & former NYTW 2050 Fellow Shayok Misha Chowdhury‘s haunting illustrated audio play chronicles the winding road toward success. Featuring Affrilachian fiddle music from Jerron “Blind Boy” Paxton and the stunning visual imaginations of Ibrahim Rayintakath​ and Liang-Hsin Huang.

Aleshea Harris’s play Is God Is (directed by Taibi Magar at Soho Rep) won the 2016 Relentless Award, an Obie Award for playwriting in 2017, the Helen Merrill Playwriting Award in 2019, was a finalist for the Susan Smith Blackburn Prize and made The Kilroys’ List of “the most recommended and underproduced plays by trans and female authors of color” for 2017.

What to Send Up When It Goes Down (directed by Whitney White, produced by The Movement Theatre Company), a play-pageant-ritual response to anti-Blackness, had its critically-acclaimed NYC premiere in 2018, was featured in the April 2019 issue of American Theatre Magazine and was nominated for a Drama Desk award.

Harris was awarded a Samuel French Next Step Award in 2019, the Windham-Campbell Literary Prize and the Steinberg Playwriting Award in 2020 and the Hermitage Greenfield Prize in 2021. She has performed her own work at the St. Mary’s College, Edinburgh and Orlando Fringe Festivals, REDCAT and as part of La Fête du Livre at La Comèdie de Saint-Étienne. She is a two-time MacDowell fellow and has enjoyed residencies at Hedgebrook and Djerassi.

Shayok Misha Chowdhury is a director, writer, and many-tentacled maker. He is the creator of VICHITRA, an ongoing experiment in queer South Asian imagination. A Project Number One Artist at Soho Rep, a NEXUS Artist at New York Stage and Film, and a Resident Artist at HERE Arts Center, Misha is also an alumnus of New York Theatre Workshop’s 2050 Fellowship, The Public’s Devised Theater Working Group, Ars Nova’s Makers Lab, and Soho Rep’s Writer/Director Lab. Selected credits: MukhAgni (Under the Radar); The Other Other (Ars Nova); How the White Girl Got Her Spots and Other 90s Trivia (Joe’s Pub); In Order to Become (Bushwick Starr); Englandbashi (HERE Arts); Virginia Grise’s Your Healing is Killing Me (PlayMakers Rep). In development: SPEECH (Playwrights Horizons) with Lightning Rod Special; Public Obscenities (Soho Rep); Rheology (HERE Arts). A NYFA/NYSCA, Fulbright and Kundiman fellow, Misha has been published in The Cincinnati Review, TriQuarterly, Hayden’s Ferry Review, Asian American Literary Review, and elsewhere. MFA: Columbia.

Ibrahim a visual artist based out of India, residing in a small coastal town from Kerala called Ponnani. After graduating in production design, he worked in the advertising industry for 5 years and has recently quit to switch back to his hometown, to have a better understanding of his practice in the context of this space and what it means to him. Ibrahim is  drawn towards topics that are mysterious to us like dreams, nature, life, memories, etc, and he tries to confront these in most of his personal works.

Liang-Hsin Huang is a Taiwanese freelance animation filmmaker currently living in Taichung, Taiwan. Keen on atmospheric scenes and hand-drawn art styles, her shorts often depict intimacy in people’s relationships and explore places, poetry and rhythm. She received a BFA from Taipei National University of the Arts in 2017 and a MA in Experimental Animation from Royal College of Art in 2019. She has experiences working with magazines, music videos, and visual poems.

Chelsea Daniel is a sound designer and musician from Durham, North Carolina. She has worked on sound for podcasts You Had Me at Black and Transmitter’s Call Your Girlfriend as well as composed original music for audio dramas and short films under the mentorship of Jeremy Bloom. Chelsea received her Bachelor’s of Music in Piano Performance from The University of Texas at Austin where she co-founded Exposure, an award-winning video series that amplifies music written by underrepresented composers. Chelsea previously interned at WQXR and will be joining The New York Times as an audio producer fellow in June.