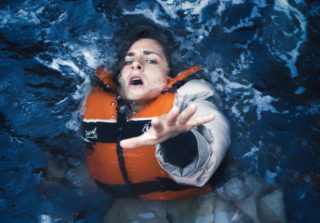 Inspired by encounters with refugees, BORDERS is an urgent, moving and occasionally hilarious commentary on one of the great crises of our time.

Through two alternating monologues, BORDERS tells the stories of a British press photographer and a Syrian graffiti artist, whose paths cross in tragic circumstances.

Written by the multi-award winning Englishman Henry Naylor, (whom the London Times described as ‘one of our best new playwrights’) the show was one of the biggest hits of the Edinburgh Festival selling out its entire run and accumulating an astonishing 19 five- and four-star reviews and the Carol Tambor Best of Edinburgh Award.

When BORDERS won the Scotsman’s Fringe First, Naylor became one of just a handful of writers to have won the leading award three times.

Henry Naylor is a multi-award-winning UK playwright, who has been described as ‘one of our best new playwrights’ in The Times, ‘one of our best new playwrights’ in The Evening Standard, and ‘one of the finest British writers on contemporary events,’ in Theatre Extra. In the past 3½ years his plays have won, or been nominated for 35 international awards, including one of France’s most prestigious awards for the arts, the Globes De Cristal. In 2016, he joined J.K. Rowling in having written one of the 10 Best Plays Of The Year by The Times. He is one of only a handful of writers to have won the Fringe First three times, and has won four of the top five Fringe awards at the Edinburgh Fringe, including the Carol Tambor Best of Edinburgh Award. The one he hasn’t won – the Amnesty International Freedom of Expression Award – he’s been nominated for twice. Three of his plays have had month long runs Off-Broadway, and in 2017 alone there were over 300 public performances of his work, over five continents. His work has been translated into eight languages.

Louise spends her working life between London and her native Denmark. She first trained at Scenekunst Academiet at the age of 21 specializing in physical theatre. In 2010 Louise took part in a project that toured across Syria, Lebanon and Georgia – the project was in the style of forum theatre. After moving to London in 2011, Louise then furthered her training at the prestigious East 15 Acting School. This led onto many projects, including assistant director of Hiraeth at Soho Theatre in London, as well as her debut play Chlorine in 2014, about a young woman’s journey through psychosis and eventual recovery. More recently she has directed the acclaimed Flew the Coop at the new Diorama theatre. And in Summer 2018 she will be directing Henry Naylor’s new play Games. At ease with both directing and acting, Louise is currently touring with a play in Denmark called Pudemin: a play aimed at younger audiences about confronting the fear of the unknown.

Michael is the founder and Artistic Director of London Classic Theatre, one of the UK’s leading touring theatre companies. Since 2000, its productions have played to over 500,000 people at more than 250 theatres in the UK & Ireland.
Michael has directed all 36 London Classic Theatre productions, including Hysteria, The Birthday Party, Absent Friends, Equus and Waiting for Godot. In Autumn 2017, he directed a major new touring production of Noël Coward’s Private Lives. Borders is Michael’s third collaboration with Henry Naylor, having previously directed Angel (Edinburgh Fringe, Adelaide Fringe, Brits off Broadway and Prague Fringe) and the 2016 UK Tour of The Collector for Kathryn Barker Productions.