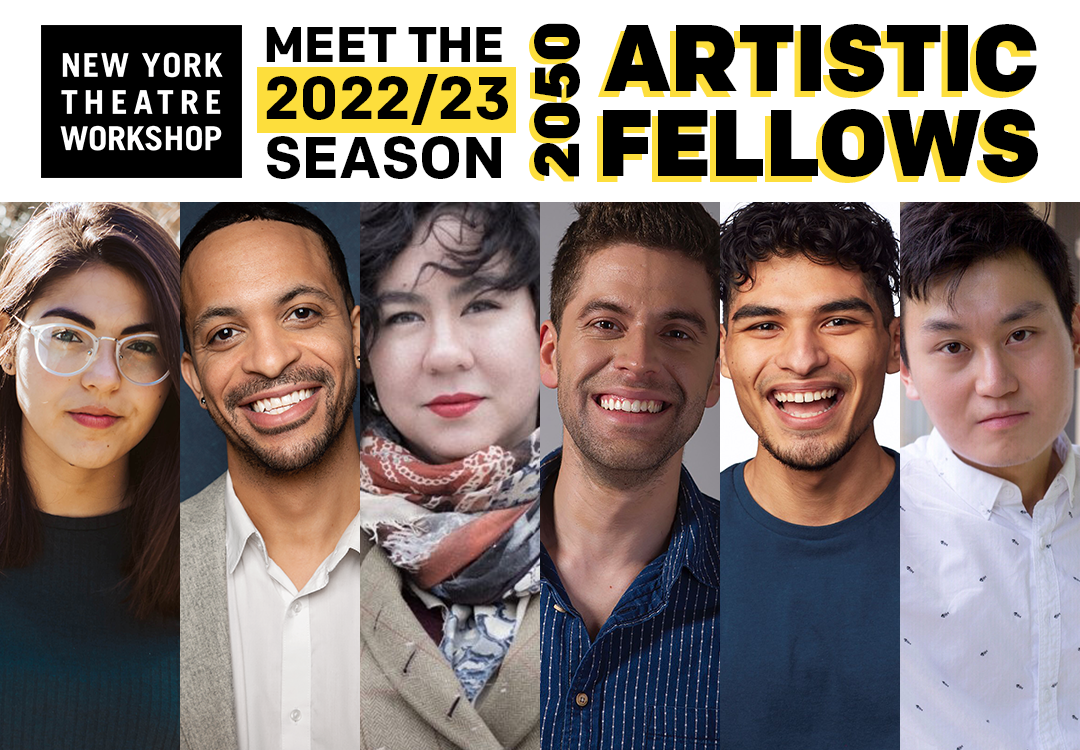 “We are deeply humbled to welcome these six singular artists as 2050 Artistic Fellows for the 2022/23 season. Miranda, Thaddeus, Aileen, Attilio, Andrew and Minghao were selected from hundreds of applicants for their boundless curiosity and distinctive visions, and we look forward to supporting their growth as artists and building community throughout the year,”

NYTW Usual Suspect and former 2050 Directing Fellow Miranda Haymon will serve as advisor to the 2022/23 Fellows, working directly with each fellow to build their individual fellowship experience as well as with the cohort and NYTW Artistic Staff to create community.

“We are equally excited to be welcoming Miranda Haymon, a former 2050 Fellow and Usual Suspect at NYTW, as the 2050 Fellowship Advisor. We’ve long been moved by their artistry and leadership and look forward to continuing to build the year alongside them.”

Miranda Cornell (she/her) is a mixed-race, Japanese American theater director and generative artist with a passion for telling stories that are unabashedly sincere, achingly human, and irrevocably alive. She has directed and staged work with the Roundabout Underground Reading Series, Ma-Yi Theatre Company, The 24 Hour Plays, New Ohio/Ice Factory, Yale Summer Cabaret, Mercury Store, Shakespeare Academy at Stratford, Moxie Arts NY, the Asian American Arts Alliance, NYMF, and the Hunter MFA Playwrights Festival. As an associate and assistant, she has worked with directors such as Robert Icke, Danya Taymor, Chay Yew, Rachel Chavkin, and Michael Greif at theaters such as NYTW, Park Avenue Armory, The TEAM and Dear Evan Hansen (Broadway and North American Tour). Miranda was the 2020 Van Lier Fellow in Theater at A4 and is a proud member of the 2nd cohort of the Roundabout Directors Group. BA: Vassar College. mirandacornell.com

Thaddeus McCants (he/him) is a Brooklyn-based Writer and Performer originally from Madison, Wisconsin. As a playwright, he is a Theater Masters Visionary Playwright, KCACTF National Finalist, Goldberg New Play Prize Finalist, and a Semi-Finalist for both the Eugene O’Neill National Playwrights Conference & American Blues Theatre Blue Ink Award. As a Television Writer, he is currently a staff writer on the second season of HBOMax’s “JULIA,” is developing his own series with BET+, and is cowriting Audible Originals with both VICE Media and Author James Patterson. As a performer, Thaddeus has worked Off-Broadway, on the high-seas, on the UCBNY Mainstage, and in the Original Cast of Disney’s Freaky Friday the Musical. Thaddeus proudly holds his MFA from NYU and BFA from Ithaca College and as always…’Word to Mom Dukes, to my ‘fam I owe everything!’

Aileen Wen McGroddy is a Chinese- and Irish-American theatre director, educator and producer of live events. Her work is imaginative, inclusive, and playfully experimental, coming from a robust background in physical theatre and a deep commitment to hospitality. She became a person in Briarcliff Manor, NY; a theatre maker in Chicago, IL; and a Master of Fine Arts in Directing at Brown-Trinity in Providence, RI. Upcoming work: Jar of Fat and Sense and Sensibility (Northern Stage); A Christmas Carol (Trinity Rep); Murder for Two (Winnipesaukee Playhouse); Indecent (Brown University). Past work: The Chinese Lady (Kithen Theatre and Geva Theatre Center); The Late Wedding, The Dumb Waiter, On The Y-Axis, Summer and Smoke, Akira Kurosawa Explains his Movies and Yogurt, and The Tempest (Brown-Trinity); Throwback Island (Writing is Live Festival and Bushwick Starr Reading Series); Regretfully, So the Birds Are (Clubbed Thumb Reading Series); Or, (The Winnipesaukee Playhouse and Portland Stage); Dani Girl (Winnipesaukee Playhouse); Knuffle Bunny: A Cautionary Musical and The Snowy Day (Emerald City Theatre); Montauciel Takes Flight (Lifeline Theatre); Ulysses (The Plagiarists); A Hero’s Journey, The Hunting of the Snark, Robin Hood and The Pied Piper (The Forks & Hope Ensemble); The Whiskey Radio Hour, Wake: A Folk Opera, Kodachrome Telephone and Sign of Rain (The Whiskey Rebellion); Gentle, The Edge of Our Bodies, Music Hall, The Anyway Cabaret (TUTA); The Nose and Reika and the Wolves (Mudlark Theatre); and In This Final Century (Theatre-Hikes). She has assisted at The Eugene O’Neill Theatre Center, Trinity Rep, Court Theatre, The Actors’ Gymnasium, The Hypocrites, and The House.

Attilio Rigotti is a Chilean theater-maker, video-game designer, and teacher. He has performed, trained, taught, and developed productions around the world, including countries such as Poland, China, Egypt, Lebanon, India, Indonesia, Japan, Italy, Cuba, the U.A.E. Along with Orsolya Szánthó, he founded the company GLITCH, creating work that seamlessly combines digital, interactive, and physical mediums with new forms of storytelling. The company’s video and technology design has been featured in collaborations with Kaki King, Mason Gross School of the Arts, MIT Music & Theatre Arts, The Juilliard School, as well as in the most recent production of Macbeth on Broadway. Their graphics and video work have been part of promotional campaigns of several Broadway shows like Company and Girl from the North Country. Attilio’s work as a director has been featured at City Lyric Opera, Phoenix Theatre Ensemble, NYU Tisch, Toronto Fringe, and Gamiotics Studios, and has been recognized by The New York Times, Vulture and American Theatre Magazine.

Andrew Rodriguez (he/him) is an actor and director originally from Mirando City, Texas. Currently based in NYC, Rodriguez remains dedicated to opening the theatrical canon by directing and developing new works not initially meant for the stage, including adapting novels, films, poems, and anthologies. Ranging from intimate, bare productions to maximum, multi-disciplinary work that bridges a unity between text and design, Rodriguez utilizes theater’s boundless, expressive possibilities to explore elements of human behavior and illuminate the stories and perspectives that have been made invisible. Rodriguez is a graduate of The University of Texas at Austin (BFA, 2019), a former Acting Apprentice at Actors Theatre of Louisville (2019 – 2020), and an alumnus of The Juilliard School’s Professional Apprenticeship Program (Drama, 2020 – 2021). He currently works with Atlantic Theater Company’s Conservatory Actor Training Programs. For more information, please visit andrewgrodriguez.com.

Minghao Tu is an immigrant playwright from Wuhan, China. Currently, he is a 2050 Artistic Fellow at New York Theatre Workshop, a Van Lier Fellow at Rattlestick Theater, and a 2022/23 Jerome Fellow at the Playwrights’ Center. He has been a resident of Pipeline Theatre Company’s 2020/2021 PlayLab, and a 2021 Travis Bogard Artist-in-Residence at the Eugene O’Neill Foundation. His works have been presented/produced at Tofte Lake Center, Voyage Theater Company, New York Public Library, Yangtze Repertory Theatre of America, Ground Floor Theatre, and UT New Theatre; featured on The Steppenwolf Theatre’s The Mix. Finalist: the Eugene O’Neill Theater Center’s National Playwrights Conference, and the 2021 Woodward/Newman Award at the Bloomington Playwrights Project; Semifinalist: PlayPenn, Ground Floor at Berkeley Rep, and Shakespeare’s New Contemporaries at American Shakespeare Center. He has been a Jame A. Michener fellow at UT Austin (MFA: 2020).

Miranda Haymon (2050 Fellowship Advisor) is a Princess Grace Award winning writer, director, and curator currently developing several projects in theatre, podcasts, and TV/film and with their production company The Hodgepodge Group. Currently, Miranda is a Resident Director at Roundabout Theatre Company. Miranda is a graduate of Wesleyan University where they double majored in German Studies and Theater and were awarded the Rachel Henderson Theater Prize in Directing. 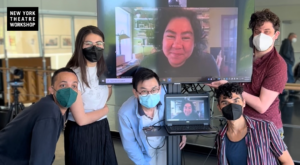 Full information about the fellowship program is available at nytw.org/artist-workshop/2050-fellowships.