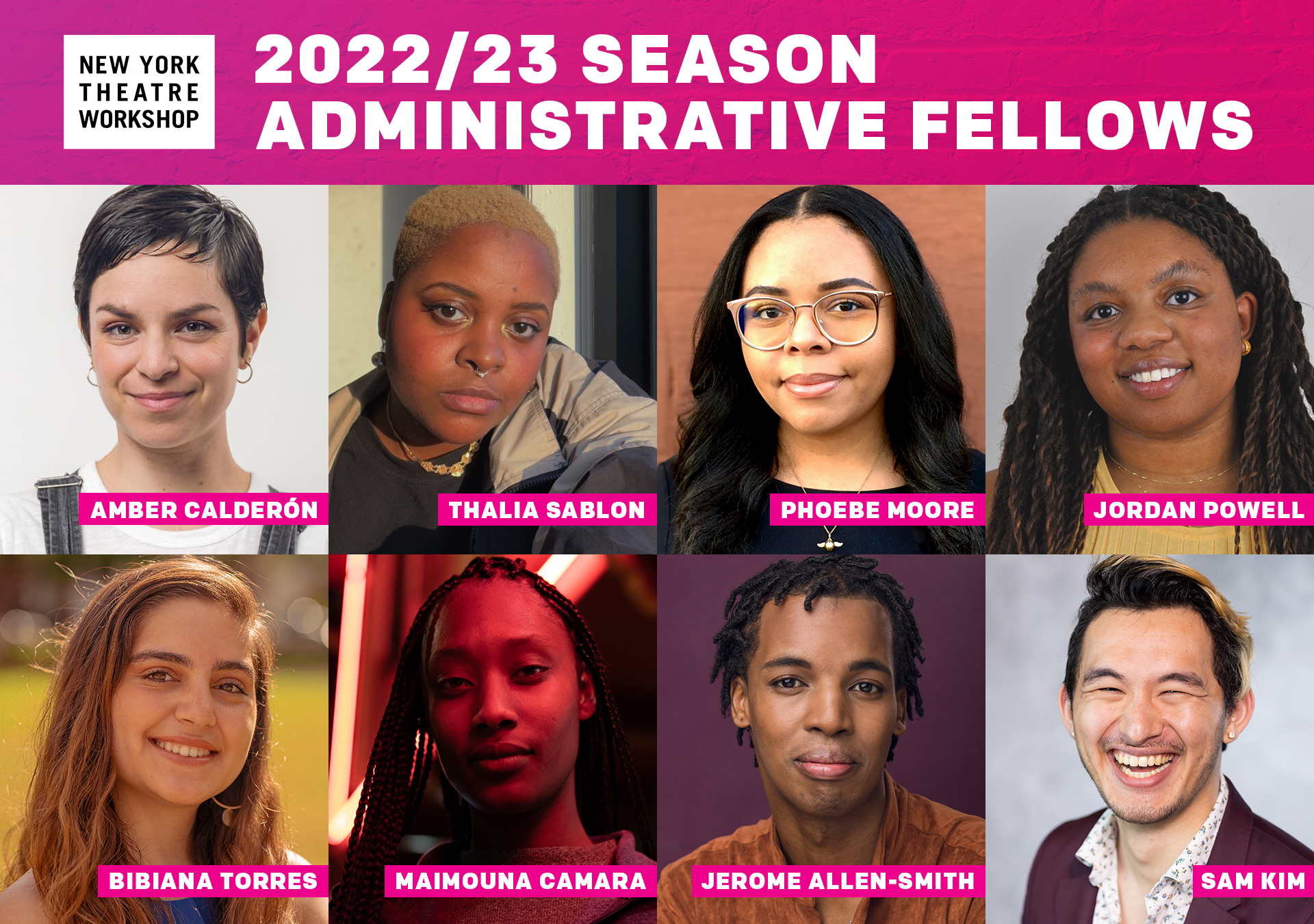 We are excited to announce the Fellows that will be joining us this September as part of the 2050 Administrative Fellowship for the 2022/23 season!

“This program continues to be a valuable opportunity for young, talented theatre leaders to hone the skills they will use to shape our field and build a sustainable, inclusive future for the theatre. Every year, we are inspired and challenged by a new cohort of Fellows, and as we continue to make our way back from some difficult years for our community, we could not be more excited to introduce these eight talented theatre-makers and welcome them to the Workshop in September!” says NYTW Managing Director Jeremy Blocker.

The 2050 Administrative Fellowship—a sister program to our successful 2050 Artistic Fellowship—represents one of several NYTW initiatives to address the economic barriers that may prevent talented individuals from pursuing careers in the theatre.

The Fellowship is named in celebration of the U.S. Census Bureau’s projection that by the year 2050, there will be no single racial or ethnic majority in the United States. This projection provokes thoughts at New York Theatre Workshop about the transformations that will take place in our society and are a catalyst for broader questions about the direction of the American theatre. But, we’re not waiting for the year 2050 to make the change we wish to see. Instead, we’re working to reflect our evolving and beautifully diversifying society now—to ensure there’s space for those who will lead us into the future to build the skills they need now.

Administrative Fellows receive a yearlong paid part-time fellowship in a field of interest, plus an additional monthly stipend, attend monthly seminars and networking events with professionals in the field, and participate in specialized career-development training among other opportunities. In turn, Fellows take on significant responsibilities across all departments of the institution, including day-to-day tasks and long-term collaborative and individual projects. Past graduates of the program have gone on to pursue full-time and freelance careers in the arts and creative industries in New York City and beyond.

LEARN MORE ABOUT OUR 2022/23 Season cohort of 2050 Administrative Fellows:

AMBER CALDERÓN, Artistic Fellow (she/they)
Amber is a Latin-American theatre producer, director and performer who curates work for marginalized theatre artists and advocates for EDIA. In New York, her directing credits include Ginger Bug, Pigeons and 27 Moths, developed with Eden Theatre Company. Amber has collaborated with Nomad Theatrical, Primary Stages ESPA, The Shrill Collective, and LAByrinth Theatre Company. In Chicago, she assisted with casting at Steep Theatre Company in their 2016/17 season and has worked at various talent agencies and casting offices in both New York and Chicago. Amber is a founding ensemble member at Bramble Theatre and an alumnus of The School at Steppenwolf.

THALIA SABLON, Artistic Fellow (she/her)
“Born in Haiti and raised in Queens, New York, I have my mother’s tongue and a New York accent.” Thalia earned her MFA in playwriting at Rutgers University. Recent writing credits include, Angela Davis’s School For Girls With Big Eyes, Treat Me Softly, and Bad American Dreams. She fills her plays with her questions about life and the world around her, in hopes that other people have the same questions and want answers too. When Thalia is not writing or producing theatre and film, she is trying to not wreak havoc in the city of New York.

PHOEBE MOORE, Development Fellow (she/her)
Phoebe is a producer, designer, and creative consultant in the event, communications, education, and nonprofit spheres from Nashville, Tennessee. With a background in event production, she has had the honor of being a former fellow with the Black Theatre Coalition in partnership with Columbia University, Disney Theatrical Group, and she is a recent Theatre Producers of Color: Producing 101 fellow. Phoebe passionately advocates for Black creatives, promoting inclusive frameworks of diversity, equity, and accessibility in any space she enters. She is a proud graduate of the Cathy Hughes School of Communications at Howard University.

JORDAN POWELL, Education & Engagement Fellow (she/her)
Jordan is an alumna from NYU Tisch School of the Arts studying Drama at Playwrights Horizons Theater School with a minor in BEMT and Applied Theater. She is a director, writer, filmmaker, designer, and educator. She is a Jamaican American from Georgia. She has recently written and directed a film, Cutie, that was developed in the Nine Muses Lab taught by Bryce Dallas Howard. She recently directed a devised performance, Alone in My Room, at Playwrights Horizon Downtown about black women shedding the expectation from the boxes placed on them and becoming their own mirror.

BIBIANA TORRES, Executive Fellow (she/her)
Bibiana is a proud Puerto Rican-Chicagoan who has worked as a director, producer, and administrator, most recently as the president of the Yale Dramatic Association. She is thrilled to be working at the New York Theatre Workshop. Bib is most energized by art that challenges form, Latin storytelling, and espresso.

MAIMOUNA CAMARA, Finance & Operations Fellow (she/her)
Maimouna is a performing arts producer and production manager, working towards a Master’s in Performing Arts Administration at NYU. Much of her creative work stems from non-profit theaters and cultural arts organizations. She’s worked as producer and designer at Towne Street Theater, along with Leimert Park Theater Consortium and The Inner City Cultural Center in Los Angeles. She’s also worked as a production manager at the Cultural Arts and Diversity Resource Center. Focused on a multidisciplinary producing approach, Maimouna has collaborated on photography books such as I CAN’T BREATHE (Carr and Scott), debuted as an associate producer on the short film THE NEST (ana Jean-Louis), and worked on several independent modeling projects. She is the co-curator of Towne Street Theater’s seasonal spoken word production known as SUM POETRY. This past year (2021), Maimouna has been a program assistant for NYU’s Creative Career Accelerator and interned at the Jujamcyn Theaters’ Creative and Executive Office.

JEROME ALLEN-SMITH, Marketing Fellow (he/him)
Jerome is pleased to join NYTW as a Marketing Fellow! Before arriving to the Fellowship, Jerome completed his MFA in Acting from The New School (c/o 2022) and is a proud returned Peace Corps Volunteer to Zboriv, Ukraine (2016-2019)! When Jerome is not ranting about graphic design and audience engagement at the Workshop, he is either travelling, going to concerts, or playing with his cat, Marceline the Vampire Queen. Jerome also is a professional actor and spends a lot of time creating and watching works around town and on the screen. For the fellowship, he is beyond excited to see the colossal 22/23 season at NYTW come alive and how he will be able to play a hand in it. He thanks his family, friends, and spouse for their undying support.

SAM KIM, Production Management Fellow (he/him)
Sam is so excited to be joining NYTW as the 2050 Production Management Fellow. Sam is a recent graduate of Northwestern University where he received a BA in Theatre with a concentration in Theatre Management and a minor in Sound Design. Sam loves working with creatives to help realize their dreams. He is especially interested in interactive and immersive entertainment. As a leader and team member, he brings a joyful presence and encourages safety, collaboration, and curiosity into the space. Sam’s hobbies include rock climbing, playing video and board games, reading, and wearing the brightest of colors.