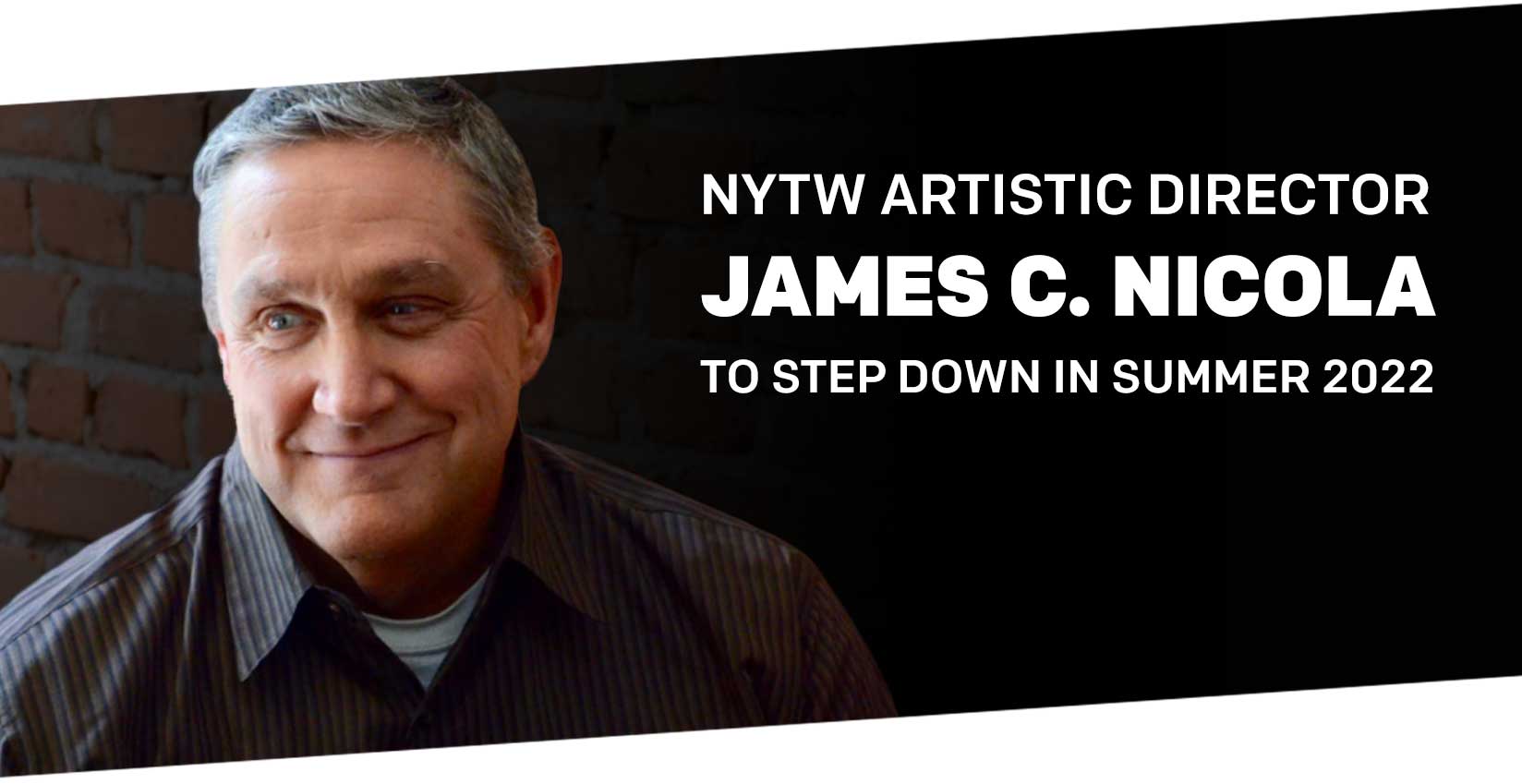 “New York Theatre Workshop has been the greatest gift in my entire life and my proudest accomplishment. I have been honored to be a steward of this rambunctious, restless community for more than three decades—almost half my life—and I am deeply grateful to those who have given me this sustaining blessing for as long as they have. In July of 2022, I will reach the age of 72. In my mind, that has always been the moment to interrupt whatever patterns there might be in my life, and to leap off a cliff into reinvention. So that is my plan. My departure will be over a year from now, as I intend to see NYTW back to welcoming audiences into our theater and provide the theatre ample time to plan for a smooth transition. I look forward to new adventures and to cheering on the next Artistic Director to create NYTW’s future.”
–James C. Nicola, NYTW Artistic Director

James C. Nicola will end his tenure as Artistic Director on June 30, 2022. Jim has been the artistic leader of New York Theatre Workshop since 1988. Under his guidance, NYTW has remained steadfast to its founding commitment of nurturing emerging, mid-career and established theatre artists and promoting collaboration and bold experimentation with theatrical forms.

“Jim Nicola is New York Theatre Workshop: his vision has defined what the theater has become under his artistic leadership. He shared the ideals of those of us who founded the theater, but it took Jim to translate those ideals into reality. He’s more than a great artistic director. Take him for all in all, he’s one of the finest human beings I know.”
–Stephen Graham, Founding Trustee

In his tenure at NYTW, Jim initiated and championed an extensive series of workshop opportunities that have continued for over 25 years, including the creation of the 2050 Artistic Fellowship. Since the 1990s, NYTW has honed an inclusive fellowship program for early career theatre-makers with a multiplicity of perspectives. These fellowships have taken many forms, supporting playwrights, directors, designers and administrators.

In its current iteration, the 2050 Artistic Fellowship is a yearlong residency for early career playwrights and directors. The Fellowship provides a space for experimentation, artistic and administrative support, and mentorship. Fellows are early career artists who, with their unique voices, give us perspective on the world in which we live; and who challenge us all to contend with this changing world. Current 2050 Artistic Fellows include Josiah Davis, Adil Mansoor, Tyler Thomas, Nissy Aya, Ruth Tang, and David Zheng; past 2050 Artistic Fellows include Whitney White, Lileana Blain-Cruz, Martyna Majok, Nathan Alan Davis and Shayok Misha Chowdhury.

“Jim is a true visionary whose unique artistry has been assembling a brilliant community of talents, providing them with the space and resources to expand the boundaries of the theatrical form, and connecting them with audiences eager to hear their voices and engage in meaningful conversations about our shared human experience. His tireless efforts to ensure that artists are afforded the freedom to fail have led to extraordinary work, and his impact is felt far beyond the Workshop’s home on East 4th Street. New York Theatre Workshop’s Trustees will be forever deeply grateful to Jim for his decades of service to our community and to the American theatre.”
–Kelly Fowler Hunter, President, NYTW Board of Trustees

Jim also created NYTW’s longstanding Summer Residencies. Beginning with a residency at the Hotchkiss School over thirty years ago, NYTW has hosted a residency program every summer of Jim’s tenure. These residencies are a place for artists to work with collaborators on various projects; just as importantly, they are a place for artists to retreat from the realities of daily life, reconnect with their artistic impulses, strengthen relationships with existing collaborators, and build community with artists who they may not already know, while giving artists the opportunity to try out new work.

NYTW has now partnered with Dartmouth College for over thirty years on a collaborative residency program. The Dartmouth summer residency ties directly into Darmouth’s academics, allowing theater students to be embedded into the rehearsal process as observers, researchers, and assistants, and have the opportunity to learn alongside various groups of artists and collaborators. Works developed at Dartmouth include Jonathan Larson’s RENT, Anaïs Mitchell’s Hadestown, Dael Orlandersmith’s Forever and Mfoniso Udofia’s Her Portmanteau. Jim and NYTW also established a residency at Adelphi University, with an emphasis on director-generated and devised works. Adelphi is also the home to NYTW’s 2050 Fellows Annual Retreat.

Under Jim’s leadership, NYTW has also launched their Companies-in-Residence, the Mondays @ 3 reading series, the 2050 Administrative Fellowship program, Mind-the-Gap, Learning Workshop, the Next Door at NYTW series and many more public programs and community partnerships.

“It will be tough to digest Jim’s departure from NYTW. I can’t think of anyone who so widened my theatrical imagination, who has done more to introduce new idioms and experiences to the American theater. He is a visionary, and a titan, and his leadership will be missed.”
–Ayad Akhtar, NYTW Usual Suspect & Trustee

In the midst of the theatre shutdown, Jim led the Workshop in finding an opportunity to continue to engage with and offer financial support to NYTW’s artistic community through the creation of the Artistic Instigator program. Artists were asked to imagine work in our present moment that creates community within the given circumstances of social distancing, celebrates the liveness that is inherent in a theatrical experience, and examines the relationship between theatre, distance and technology. The Artistic Instigator program has resulted in projects from Denis O’Hare and Lisa Peterson, Victor I. Cazares, Celine Song, Theater Mitu and Rubén Polendo, the Dominican Artists Collective, Martha Redbone and Aaron Whitby, Doug Wright, Hilton Als, Modesto Flako Jimenez, and upcoming projects from Jeremy O. Harris, Kristina Wong, Aleshea Harris, Whitney White and more.

“Jim has been one of the most generous and forward thinking arts leaders in New York. NYTW is a home for artists who are taking risks, and asking major questions about the world through aesthetic and political experimentation in their work, in large part because of Jim’s heart, support, and quiet rigor. His leadership at NYTW will be missed, and he leaves a thriving institution for visionary new leader(s) to take into the next decade.”
–Rachel Chavkin, NYTW Usual Suspect & Trustee

“With the ground-breaking tastes of Diaghilev or Peggy Guggenheim, the enigmatic grace of the Buddha, the fierce morality of Bertrand Russel and the wicked humor of your favorite naughty Uncle, Jim Nicola presided over NYTW for over 30 years. Time and again, he put this unassuming East Village theater at the very center of the nation’s cultural conversation. As a mentor to hundreds of young theater artists, his influence on the theatrical canon will be felt—gratefully—for generations to come.”
–Doug Wright, NYTW Usual Suspect & Trustee

NYTW productions have won virtually every major theatre accolade, including the Pulitzer Prize and 25 Tony Awards. The theater’s success on Broadway under Jim’s leadership has allowed NYTW to continue and expand its core mission: to continue investing in the next generations of artists, and to give all their artists the space and resources they need to follow their vision.

Before joining NYTW, Jim spent seven years at Arena Stage in Washington, D.C., first as a National Endowment for the Arts Directing Fellow and later as a Producing Associate, where he directed productions including Marsha Norman’s ‘night Mother, Christopher Durang’s The Marriage of Bette and Boo, and Emily Mann’s Still Life. Mr. Nicola’s other directing credits include Leonard Bernstein’s Trouble in Tahiti and Gilbert and Sullivan’s Trial by Jury at the WPA Theatre, John Guare’s Landscape of the Body at the Studio Theatre, and Ernest Joselovitz’s Flesh Eaters and Jessie’s Land at the New Playwrights Theatre.

From 1975 to 1980, Jim was a Casting Coordinator for the New York Shakespeare Festival, where he developed his continuing, passionate commitment to new voices in the theatre. Jim fueled his love of theatre during the early 1970s, when he was an Assistant Director at The Young Vic/National Theatre of Great Britain and an Assistant Stage Manager at London’s Royal Court Theatre. Jim is a graduate of Tufts University and is a recipient of Tufts University’s P.T. Barnum Award, the Erwin Piscator Award, and the 2015 Miss Lilly Award for supporting women in theater.

Over the coming months, NYTW will be conducting a thorough search for its next Artistic Director. NYTW is committed to an equitable and transparent process and will announce a search firm partner and further details about the timeline for submissions and selections as soon as that information is available.

We invite you to share your favorite stories and leave a message for Jim using this submission form.