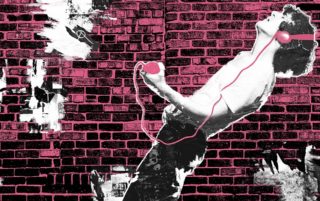 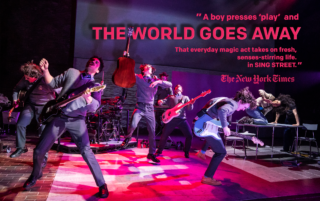 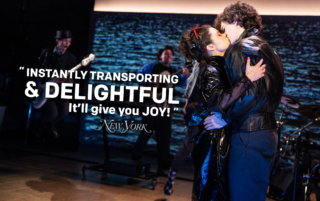 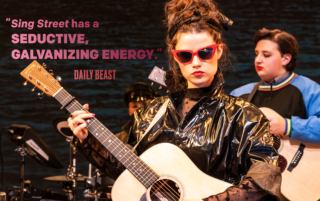 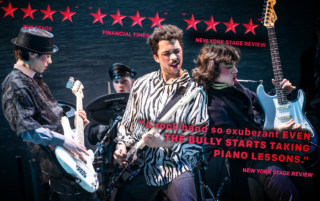 SING STREET ran approximately 2 hours and 15 minutes with one intermission.

Dublin, 1982. Everyone is out of work. Thousands are seeking bluer skies across the Irish Sea. Sixteen-year-old Conor and his schoolmates turn to music to escape troubles at home and impress a mysterious girl. With a score that embraces the new wave sounds of the era, SING STREET celebrates the thrill of first love and the power of music.

Be among the first to welcome the team to Broadway’s LYCEUM THEATRE! 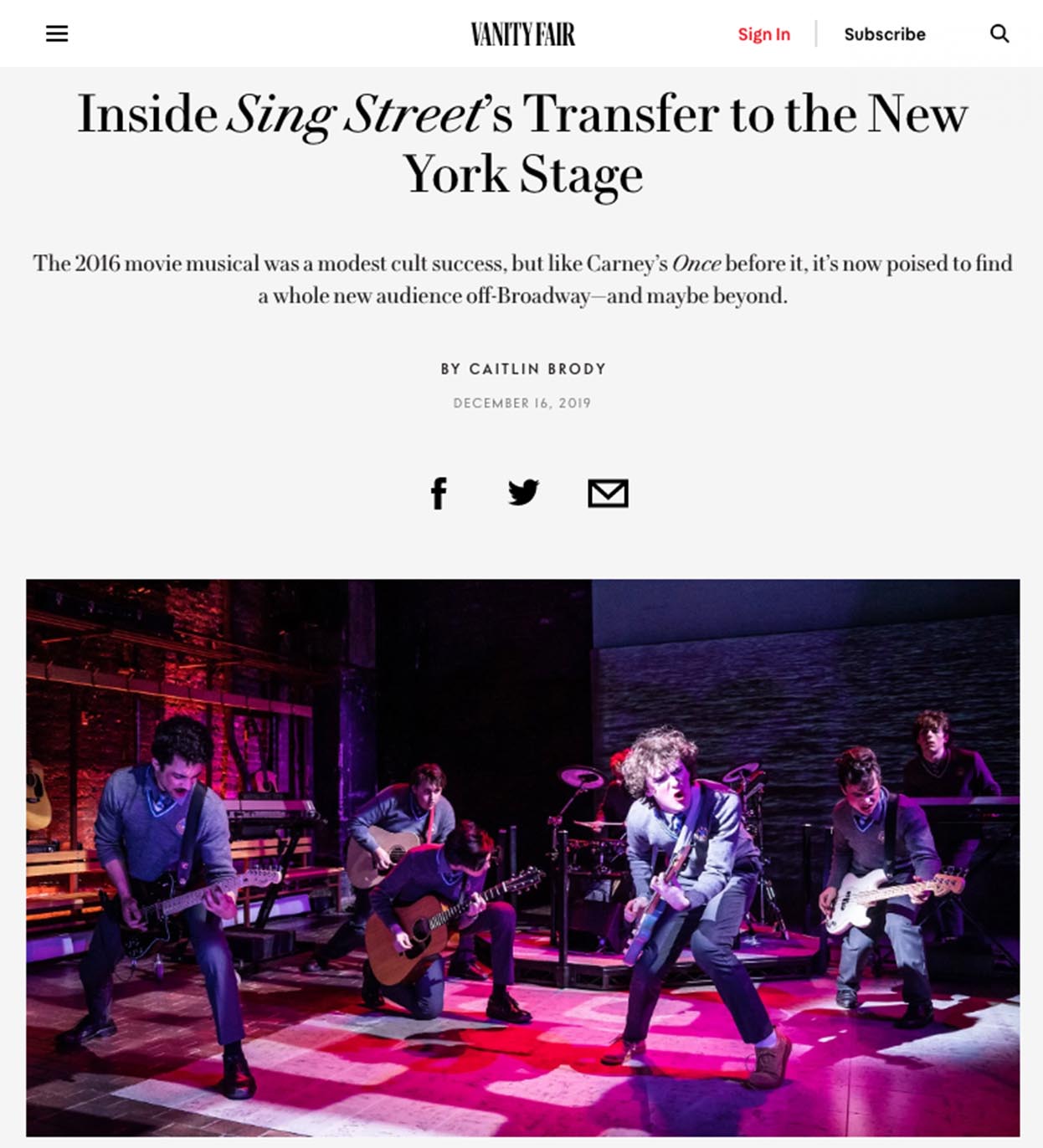 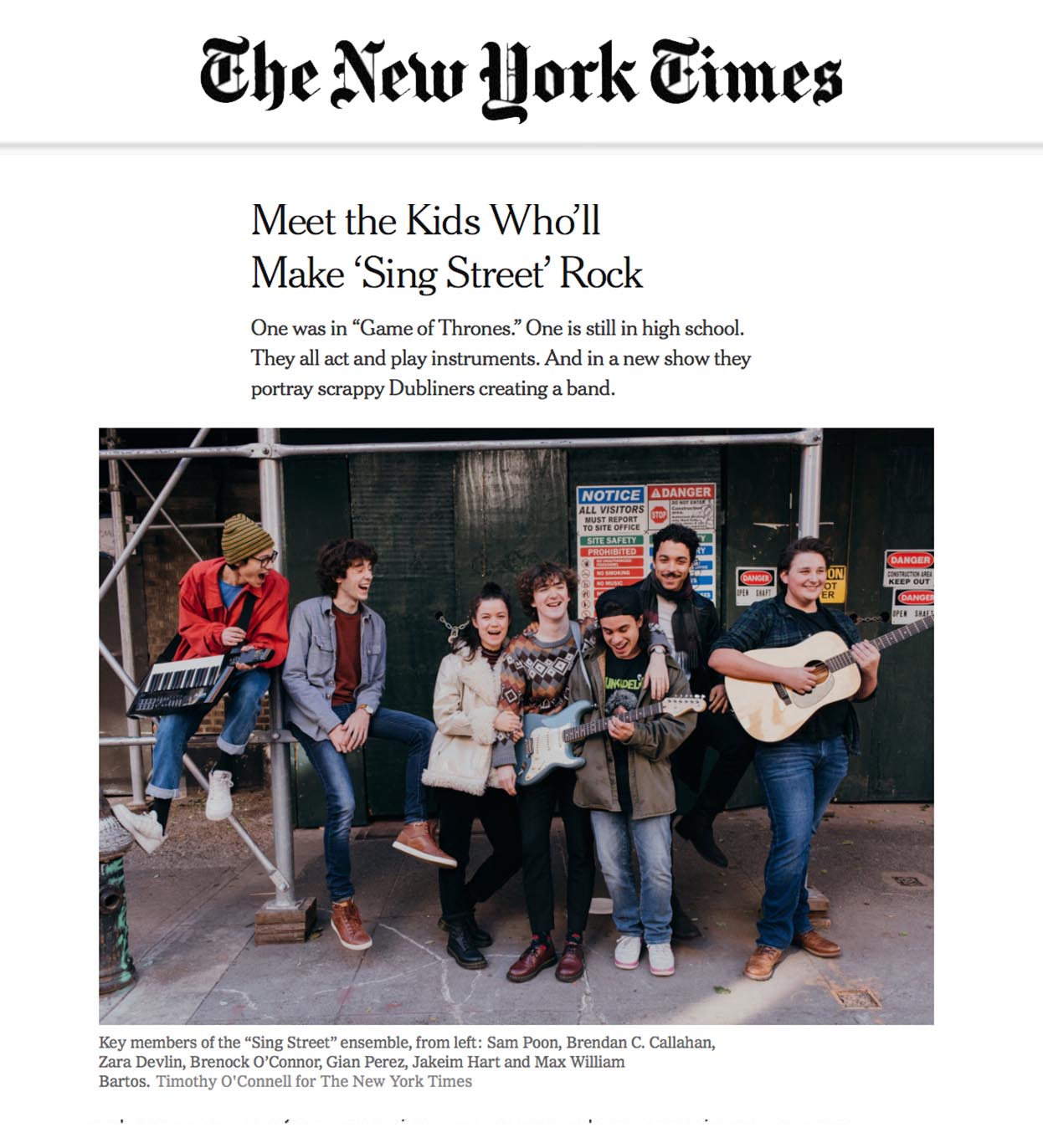 ENDA WALSH is a Tony and multi award-winning Irish playwright. His work has been translated into over 20 languages and has been performed internationally since 1998. His recent plays include Max Porter’s Grief is the thing with Feathers (2018/19), The Same (2017), produced by Corcadorca, Lazarus (2016) with David Bowie at NYTW; Arlington (2016), Ballyturk (2014), Misterman (2012) produced by Landmark Productions and Galway International Arts Festival; and the operas The Second Violinist and The Last Hotel with Donnacha Dennehy for Landmark Productions and Irish National Opera. His other plays include Once (2011) with NYTW; The New Electric Ballroom (2009), Penelope (2010) and The Walworth Farce (2006) with Druid Theatre Company; Chatroom (2005) with the National Theatre; The Small Things (2005) with Paines Plough; Bedbound (2000) with Dublin Theatre Festival; and Disco Pigs (1996) with Corcadorca. For the past 10 years he has been supported and shown work at St. Ann’s Warehouse in New York. He has made five installation ‘Rooms’ with Paul Fahy and the GIAF: Room 303, A Girl’s Bedroom, A Kitchen, Bathroom, Office 33A. His film work includes Disco Pigs for Temple Films and Renaissance; Hunger for Blast and FILM4; and The Last Hotel which was made into a film for Sky Arts, produced by Brink Films, Landmark Productions and Wide Open Opera. In 2014, he received an honorary doctorate from NUI Galway.

JOHN CARNEY was born in Dublin in 1972, and began his film career writing, producing and directing two award winning short films (Shining Star and Hotel) and directing videos for the Irish band The Frames, with whom he also played bass guitar from 1991 to 1994. His first feature film, November Afternoon—a self-financed black and white production—was voted Best Feature of 1997 by the Irish Times. His next film, Just in Time, was an hour-long TV film starring Frances Barber and Gerard McSorley which the Irish Times voted Best TV Film of 1998. He subsequently co-wrote and directed On the Edge, starring Cillian Murphy and Stephen Rea, which won the Silver Hitchcock Award for Best Film. He then co-created, wrote/directed three series of the hit RTÉ television series “Bachelors Walk,” the most successful independently produced drama in the history of Irish television. In 2007, he wrote and directed the musical feature film Once, winner of the Sundance Audience Award, an Independent Spirit award for Best Film, a National Board of Review award, the Academy Award for Best Song, and 8 Tony Awards for the stage musical adaptation including Best Musical. Subsequent films written and directed by John include the original feature Begin Again and Sing Street, which premiered at Sundance in 2016 and was nominated for a Golden Globe award. John has most recently finished shooting his New York set anthology series Modern Love for Amazon with an all-star cast including Anne Hathaway, Tina Fey, Dev Patel and Andrew Scott.

GARY CLARK began his career as singer-songwriter-instrumentalist in late ’80s band Danny Wilson, penning the band’s 1987 international hit “Mary’s Prayer.” Now considered classic, it still regularly re-enters the top 100 airplay charts in the UK. After the band split in 1990 he moved into songwriting and production for other artists including Natalie Imbruglia, Liz Phair, Lloyd Cole, Melanie C, Emma Bunton, The Veronicas, Skin, Delta Goodrem, McFly, Lawson, Gin Wigmore, Mark Owen, The Xcerts, The Wanted and Demi Lovato. In 2014, he had two of his biggest international successes to date with Kim Cesarion’s “Undressed” and Alex Hepburn’s “Under,” both of which were top five singles across Europe and number 1s in numerous countries. His songs have been used frequently in film and television, including There’s Something about Mary, “Nightwatch,” Jawbreaker, Wild Things, Charlie’s Angels, “Grey’s Anatomy,” “666 Park Avenue,” “Underbelly,” “Teen Wolf” and “Pretty Little Liars.” Clark has 3 BMI awards, has won Nordoff-Robbins/PRS songwriter of the year and has an Ivor Novello nomination for “Mary’s Prayer.” He recently wrote/co-wrote the original songs for John Carney’s movie Sing Street. To date, his song “Drive It Like You Stole It” has won Best Original Song at the Nashville Film Festival, Best Song at the Atlanta Film Critic’s Society Awards, and was nominated for Best Song at the U.S Critic’s Choice Awards. He is currently writing the music for the Nanny McPhee stage musical with Dame Emma Thompson and is executive music producer and composer of Modern Love with John Carney for Amazon.

REBECCA TAICHMAN. 2017 Tony Award for Best Director of a Play, Obie, and Outer Critics Circle Awards for Indecent written by Paula Vogel (Yale Repertory Theatre, La Jolla Playhouse, The Vineyard Theater, Broadway at The Cort Theatre). Rebecca has directed on and Off-Broadway, new plays and classics, musicals and opera. She has worked with writers Jocelyn Bioh, Sarah Ruhl, Danai Gurira, Enda Walsh, Brian Selznick, Kirsten Greenidge, Nico Muhly, David Adjmi, and Stephen Karam among others. She has worked at theaters such as The Roundabout Theatre, Lincoln Center, The Public Theater, Playwrights Horizons, MCC, The Shakespeare Theatre Company, The Old Globe Theatre, ART, Oregon Shakespeare Festival, McCarter, and Woolly Mammoth. Rebecca is a resident director at The Roundabout Theatre in NYC, a Henry Crown Fellow at The Aspen Institute, and a graduate of the Yale School of Drama. rebeccataichman.com

CHRISTOPHER AKERLIND has designed lighting and sometimes scenery for over 600 productions at theater, opera, and dance companies across the country and around the world. Broadway credits include: Indecent (Drama Desk and Tony Awards), Rocky the Musical (Tony nom.), The Gershwins’ Porgy and Bess (Tony nom.), Superior Donuts, Top Girls, 110 in the Shade (Tony nom.), Talk Radio, Shining City, Awake and Sing (Tony nom.), Well, Rabbit Hole, A Touch of the Poet, In My Life, The Light in the Piazza (Drama Desk, Outer Critics, Tony awards), Reckless, The Tale of the Allergist’s Wife, Seven Guitars (Tony nom.), and The Piano Lesson among others. Recent projects include, Merrily We Roll Along at the Roundabout’s Laura Pels Theater, Katya Kabanova for the Scottish Opera, Martha Clarke’s new pieces L’Altra Metra del Cielo (Teatro alla Scala), Angel Reapers (Signature Theater, NY), and the revival of Garden of Earthly Delights (Minetta Lane Theatre), Franco Dragone’s KDO! (Foret Nationale, Brussels), the world premiere of Philip Glass’s Appomattox, and Tobias Picker’s Dolores Claibourne (San Francisco Opera), Janos Szasz’s production of The Seagull (American Repertory Theatre), Dimitri Kourtakis’ Kafenion (Athens/Epidaurus Festival), Anne Bogart’s production of Alcina (Washington National Opera), and Robert Woodruff’s production of Rinde Eckert’s Orpheus X (TFANA, Edinburgh & Hong Kong Festivals). He is the recipient of the Obie Award for Sustained Excellence in Lighting Design, the Chicago area’s Michael Merritt Award for Design and Collaboration, and numerous nominations for the Drama Desk, Lucille Lortel, Outer Critics Circle and Tony Awards among many others. He has taught on the faculties of CALARTS, Bowdoin College, the University of Southern California, and the Broadway Lighting Master Class, and as a guest teacher for the graduate Design Department of NYU’s Tisch School of the Arts, the University of Connecticut, the Carnegie Mellon School of Drama, and at his graduate alma mater: the Yale School of Drama.

Martin Lowe’s theatre credits include Harry Potter and the Cursed Child (West End and Broadway), Pinocchio, Once, Our Ladies of Perpetual Succour, The Twits, The Light Princess, War Horse, Caroline or Change, Jerry Springer the Opera, A Funny Thing Happened on the Way to the Forum, Mamma Mia!, The Full Monty, Once on this Island, Cats, Les Misérables, Jedermann and The Threepenny Opera. He won a Tony, a Grammy and an Olivier award for his work on Once, and won a Golden Reel award for his work on Mamma Mia! The Movie.