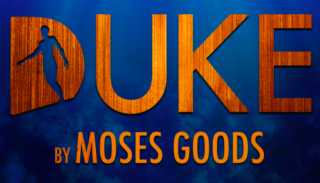 Written and Performed by Moses Goods

Award-winning actor, writer and storyteller Moses Goods creates an unforgettable portrayal of the life of Duke Paoa Kahanamoku in his one-man show entitled “DUKE”. Hawai‘i’s first Olympic gold medalist and the father of modern surfing, Duke Kahanamoku is unquestionably one of the most important and beloved figures in Hawaiian history. Duke lived through Hawaiʻi’s transition from an independent Nation to a U.S territory and on to statehood. In many ways his extraordinary life served as a guiding light for Hawaiʻi’s people in their struggle to find identity in a changing world. Known for his humility, kindness and love of community Duke’s fame and renown made him a role model and source of inspiration for all.

The original production of “DUKE”, directed by Eric Johnson, “DUKE” premiered on October 16th 2015 at Honolulu Theatre for Youth, where it successfully ran for five weeks and reached over 10,000 audience members. The development of “DUKE” was done in conjunction with the creation of Bernice Pauahi Bishop Museum’s exhibit entitled “Duke Paoa Kahanamoku” which commemorated the 125 anniversary of the legendary Hawaiian athlete.

Written and Performed by Moses Goods

Special Mahalo to the Cathedral of Saint Andrew for providing our home.

We are delighted to partner with Malama Pono, Ltd. to introduce and share the Legacy of Duke Kahanamoku.